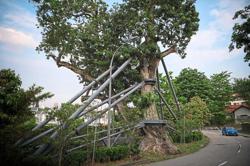 THE recent felling of trees in the Taman Rimba Kiara recreational park in Kuala Lumpur sparked anger among the public.

Kuala Lumpur City Hall (DBKL) justified their action by saying they were old and diseased.

Could they have been saved and who is responsible for maintaining trees? That is the work of arborists like Philip van Wassenaer, whose job is to save trees.

Trees provide benefits but they also pose a challenge because when they start to age, maintenance is required.

“Urban forestry and management (of trees) is something that is growing internationally due to the concerns over global warming caused by urbanisation.

“If we do not have trees and green spaces, there will not be enough livable spaces. Healthy trees that have been allegedly felled in Taman Rimba Kiara by DBKL recently. – filepic

“In the last 10 years, this is a growing trend especially in North America as people recognise that green infrastructure is of equal importance as grey infrastructure like roads; we realise the value and benefit of trees.

“And just like any other infrastructure, if you leave it alone, it will fall apart, you need to make investments.

“With so many benefits from trees, it does not make sense that we do not invest in taking care of them,’’ said van Wassenaer.

He said that proper tree care and proactive measures could save local authorities more money in the long run.

“While there is a risk of something going wrong when there are people and buildings around, it could be avoided if trees are well managed so that tree failures will not lead to losses, deaths or injuries.

“It is better for municipalities to pay money to manage trees, than pay compensation to victims A photo of a tree failure which refers to decaying or damaged trees that will fall off or hang to the damaged trunk.

“You will actually benefit from the expenditure in the long run,” van Wassenaer said, adding that poor pruning resulted in trees which were prone to more problems.”

Tree failures refer to decaying or damaged trees that will fall off or hang from the tree trunk.

He noted that trees do not have adequate space to grow.

“In a young tree population, there is a good opportunity to develop good trees that are less prone to problems. However, a spokesman from Kuala Lumpur City Hall said that tree fall in Malaysia was often the result of natural disasters.

“Proper tree care can only prevent tree failure that is not caused by natural disasters.

“During thunderstorms and strong winds, trees will fall,” he said pointing out that in May alone, there were at least 250 cases of fallen trees due to thunderstorms.

The proper care of trees does not seem to be a big priority in Malaysia. There are only an estimated 75 certified arborists in Malaysia, and some local councils have none.

Putrajaya Corporation has nine and DBKL four; but some like the Kajang Municipal Council have none.

In comparison, Singapore has 400 certified arborists as listed in the Centre for Urban Greenery and Ecology website.

People take trees for granted but they actually save us money, said van Wassenaer. MBSA staff from the Landscape Department cutting branches of a fallen tree.

“Trees also reduce the severity of air pollution as it releases oxygen and breathes in carbon dioxide.

“Those with breathing problems also benefit as trees trap fine particles and wash them away when it rains,” said van Wassenaer at the Fellow Urban Forester Programme in FRIM.

Trees also absorb water from the soil and releases it into the atmosphere. Trees are evapotranspirators as the leaves act as interceptors, catching falling rain and evaporates, which leads to rain precipitation.

He said without trees, we would have to pay more for stormwater retention systems, deal with higher medical bills and spend more on energy which leads to higher carbon emissions

Van Wassenaer has 20 years’ experience and has been an International Society of Arboriculture (ISA) Certified Arborist since 1996 and a member of the prestigious American Society of Consulting Arborists (ASCA) since 1999. MBSA staff pruning a tree from a crane.

FRIM appointed him to conduct research into urban forestry in Malaysia. He was also asked to share his knowledge on the management as well as the care and maintenance of trees.

The talk was organised by the Malaysia Arborist Association (PArM) and hosted by Putrajaya Corporation and DBKL.

According to PArM, an urban forestry management plan was a must for proper management of city trees.

“All local authorities must have a long term and short term plan for tree management starting with street trees to reduce risks to the public.

“The city would need to have an annual operating plan to ensure all trees are pruned and examined at least once every five years.

“An inventory of all trees is a must, alongside having trained and competent persons undertaking the job.

“The biggest setback in finding solutions to address the conflict between development and trees is lack of knowledge in urban forestry and arboriculture; and lack of competent persons doing tree management and maintenance,” PArM said in a statement.

The system has won a gold medal in the FRIM Innovation Award 2013 and was also recognised at the Malaysia Landscape Architecture Award (MLAA) 2014.

Efforts to maintain trees in municipalities