MIRI: Miri City Council (MCC) wants to go big in promoting a “green lifestyle”, not just in terms of the city’s environmental aspects, but also in terms of eating habits and other daily lifestyles of its 350,000 population.

Mayor Lawrence Lai said MCC’s aim to turn Miri into a green and healthy resort city was not confined to creating a public environment conducive to modern living, but also in terms of creating a population of healthy and happy people.

“Miri as a resort city must be a place where we stress on the importance of preserving the environment and also the daily lifestyles and habits of the people.

“We want to see a truly developed city with ultra-modern infrastructure while making sure that its population is healthy and vibrant.

“In order to achieve this, we must have an environment conducive to healthy living where the people learn and practise good habits in their daily life in a natural manner and without being forced into it.”

Eloborating, he said: “One of the ways to become “greener” and healthier in terms of daily habits is to eat food that are natural and organic.

“Today, having a healthy lifestyle is no longer a matter of luxury, but a necessity.

“We no longer talk about health only in terms of provision of medical treatment and medical facilities because while the government does provide cheap medical and health facilities, there is an increasing awareness that we need to prevent illnesses and sicknesses, and one of the ways is to consume good food in our diet.

“I am glad that today, we in Miri city see the setting up of a “green” pharmacy that focusses on selling natural food supplements that are organic and healthy,” he said when declaring open the ML Maju Pharmacy here yesterday.

The pharmacy, owned by Marlene Lim, who is former Miss Sarawak and former Miss Malaysia, is unique as it sells a wide range of imported food and health products that are totally organic and natural, made mainly from fruits, plants and herbs.

Lai praised Lim for her role in promoting the city as a venue for beauty pageants, pointing out that she had been actively involved in organising the Miss Global International beauty queen final here over the past few years, which had helped give Miri a lot of local and international publicity.

Lim, a qualified and trained pharmacist, is also the first beauty queen to go bald in 2012 to help raise funds for cancer-afflicted children of the Sarawak Children Cancer Society.

Also present at the launch was reigning champion of the Miss Global International Malaysia 2013/2014, Charissa Chong, and another former beauty queen, Esther Tan, who was Miss Oriental Tourism Malaysia 2012. 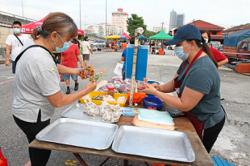 ‘Keep kids and elderly away from crowded places’