Volunteers and supporters cheering on (from left) Warren Lim, Malcalm Chew Wai Hoe and Knut Haug as they approach the finishing area of the race.

AUSTRALIA’s Brad Kahlefeldt stole the show at the inaugural Ironman 70.3 Putrajaya when he completed the gruelling race ahead of a strong field.

The 34-year-old started off in the professional category with a 1.9km swim followed by a 90km cycling before hitting the road around Precinct 2 for a half-marathon distance.

“It’s a great run course, but from an athlete’s point of view (if you are at the front), it was really hard not seeing anyone out there,” said Kahlefeldt, who completed the event in 3hr 55min 36sec.

“It definitely requires a different style of racing when in such humid conditions. In the closing stages, I really started to feel it. Hydrating early on the run is key and I am very happy to be able to take this win,” he said. 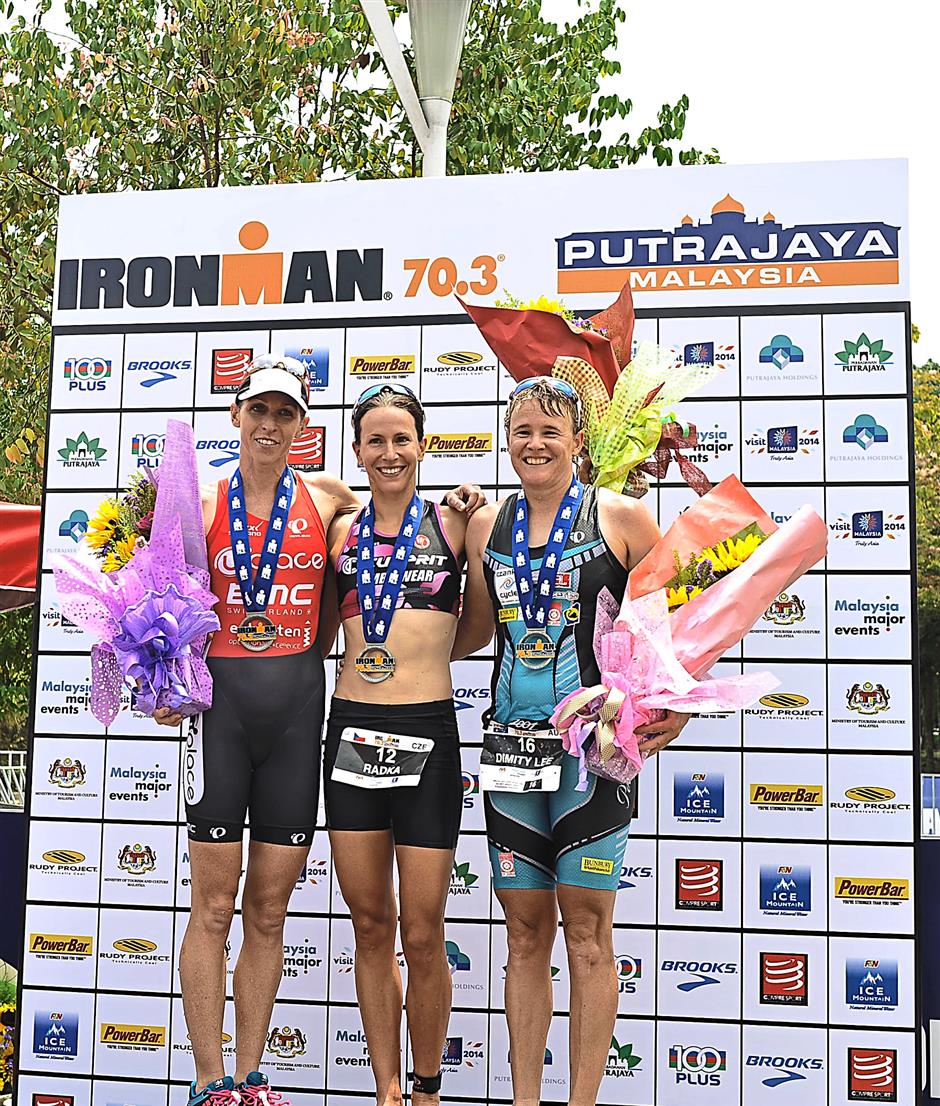 The winners of the professional women’s category celebrate on the podium (from left) Liz Blatchford, Radka Vodickova and Dimity-Lee Duke.

Brad led out of the swim in the men’s professional race and was pipped out of transition by Frenchman Denis Chevrot, while fellow Aussie, John Polson followed two minutes later. The three athletes controlled the front of pack through the race all day.

In the women’s professional category, the lanky Radka Vodickova took her first Ironman 70.3 win when she completed the race in just 4hr 23min 9sec.

The Czech athlete said she happy and delighted to give an interesting for the spectators who came out to show their support for the race.

Although Radka had to stop twice in the race following a mechanical issue with her bike which left her costly time behing pre-race favourite Liz Blatchford, but the 29-year-old soldiered on and did not disappoint her fans. “I was angry (about mechanical issues) and I used that anger to run hard. I am used to the heat and know that I can cope with the heat,”she said when she returned just a minute ahead of Liz from the US.

The American was ahead of Radka through the swim in the lake (26min 39sec) as well as on the cycling course (2hr 24min 34 sec). However, she fell back in the 21km run as she only managed to complete in 1hr 30min, which was a costly eight minutes slower than Radka.

Two-time international Ironman 70.3 champion Craig Alexander withdrew from the professional field as he was still recovering from an injury.

Craig, who is also a three-time Ironman world champion, raced in the relay category where he swam for Team Crowie. The champions from the women’s 25- 39 category (from left) Carole Fuchs, Elvia Suryadi and Mandy Tik with their trophies.

The largest field of triathletes in the Ironman 70.3 came from the age-group participants.

Malaysia’s Mohd Amran Abdul Ghani, 34, was named the fastest local participant, who completed the race in 4hr 46min 15min, which earned him an autographed biography of Craig, who also presented the prize to him.

Top three winners from each age-group also received trophies. Among Malaysians, only Khor Ngee Leong, who was in the 55-59 years group, excelled, by winning the category’s top prize in 5hr 22min 26sec.

“It was a very hot race and certainly not easy at all for me as everyone was really good,” he said after finishing ahead of Australia’s Alan Preston.

The prize presentation was made extra special as the oldest participant of the race, Yee Sze Mun, was also awarded for winning his category.

Sze Mun, 77, who has competed in 18 Ironman races around the world, was all smiles when he received his prize while being cheered on by other participants of the event.