Kavin (centre in white) with Thongchai Jaidee (on Kavin's right in yellow) and participants of the Emirates Junior Golf Clinic.

For the ninth consecutive year, Emirates celebrated its official airline sponsorship of Maybank Malaysian Open with a number of on-ground activities.

“We hope that with the sponsorship, our customers have been brought closer to the game while enjoying Emirates’ hospitality.”

Throughout the Maybank Malaysian Open 2014, Emirates lined up a range of activities for both fans and golfers.

Visitors to the Emirates booth were given a sampling of Arabic dates available on board its flights.

Apart from meeting the iconic multicultural cabin crew, visitors were able to keep abreast of the tournament via a live TV feed.

Wi-Fi connectivity also enabled visitors to get in touch with family and friends and share latest updates on tournament scores.

Skywards members and visitors who signed up for the Emirates Skywards frequent flyer programme were rewarded with free gifts including A380 aircraft models, 2014 FIFA World Cup mascot, Emirates branded key rings and magnets.

Additionally, Emirates Skywards members who booked on Emirates for travel between April 17 and May 31 were automatically entered into a draw to win two return tickets from Kuala Lumpur to Dubai and two hospitality tickets to this year’s DP World Tour Championship in Dubai which will take place in November.

As a show of appreciation to corporate partners, frequent flyers and members of the media, Emirates combined the watching of golf with the comfort of the luxurious Emirates hospitality marquee.

Visitors were treated to first class hospitality, from scrumptious gourmet offerings to watching the tournament action unfold ‘live’ as it overlooked the 18th hole or through the TV screens.

Golfers such as Matteo Manassero and Peter Uiehlien also surprised patrons with visits to the marquee.

Twenty lucky young golfers from the Royal Selangor Golf Club and Kelab Golf Perkhidmatan Awam also took part in the Emirates Junior Golf Clinic where they were coached by professional golfer, Thongchai Jaidee, on fundamentals of golf including putting techniques. 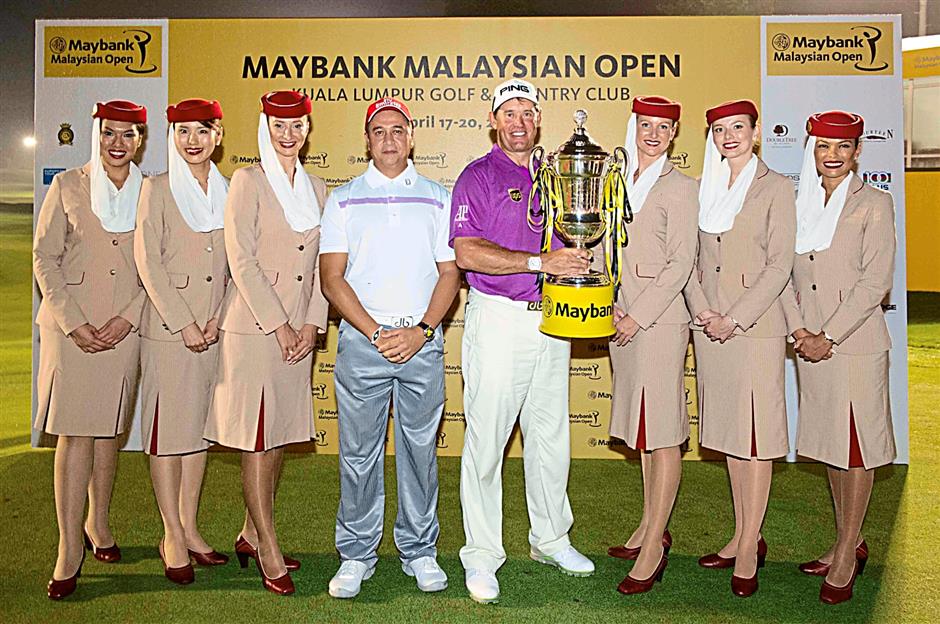 Kavin celebrates with the champion of the Maybank Malaysian Open 2014 Lee Westwood (centre).

Mariah Izabelle, one of the participants of the golf clinic who has been playing golf for the past three years said, “I want to be like Michelle Wie and play in all the big tournaments around the world. I am very happy to have participated in the golf clinic. I wish that one day I can be a professional player and travel the world for golf tournaments.”

Kavin said, “We hope this clinic has been an engaging medium to inspire young golfers to learn more about the sport and allow them to network and support one another in their favourite sport.”