Racing fans have a roaring good time despite hot weather

Formula One fever was in the air at the Petronas Formula One Grand Prix race last weekend.

The venue — Sepang International Circuit (SIC) — was filled with race enthusiasts from all over the world, despite temperatures soaring up to 32 degrees.

This writer was lucky enough to experience it for the first time. I am not a big fan of racing, but it was hard not to get caught up in the highly charged atmosphere.

Although traffic was heavy, it was well managed by traffic policemen and site personnel.

Parking was plentiful and shuttle buses ferried us to the different entry points.

At the main entrance, fans were waving flags of their favourite teams or countries representing the racers. 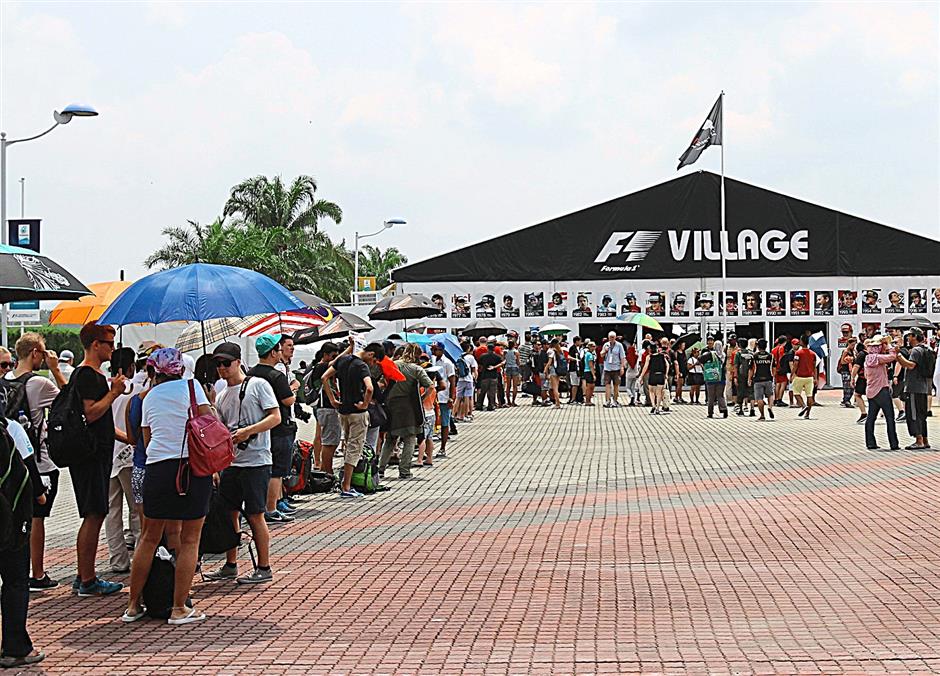 Visitors lining up to enter the F1 village which houses vendors selling official merchandise, at the Petronas Formula One Grand Prix 2014 at Sepang International Circuit on March 30, 2014.

Others wore their team colours or capes with logos around their backs.

Brazilian students Bruno Giacomim and Thiago Gasperazzo, both 21, were seen carrying their national flag as they made their way to the race track.

They were supporting fellow countryman Felipe Massa from the Williams racing team. A visitor signing the MH370 Wall of Hope at the 2014 Formula 1 Petronas Malaysia Grand Prix at Sepang International Circuit on March 30, 2014.

“We travelled by bus from Singapore, where we are on holiday, to catch the race,” said Gasperazzo, who has been watching the races since he was a teenager.

This was the first time both men were in Malaysia and at an F1 race.

English students Alexander Ross and Ben Pope were all for their favourite racer, Lewis Hamilton, who represents Mercedes.

The pair are backpacking through South-East Asia and stopped by Malaysia to watch the race as prices for the tickets were affordable.

“The most exciting part of a race is the first and last lap,” said Pope, 23, who has been following the F1 races for five years. Crowds of spectators trying to get a closer look at the winners after the race at the prize giving ceremony for the 2014 Formula 1 Petronas Malaysia Grand Prix at Sepang International Circuit on March 30, 2014.

Around noon, a long line formed in the compound as fans got to meet and greet racers at an autograph session.

Finnish fan Matli Miistonen was with several friends waiting to catch a glimpse of Ferrari driver, Kimi Raikonnen, who is from Finland.

This is Miistonen’s second time at an F1 race.

“We are here for five or six days to explore Malaysia as well,” he said, adding that the humid weather was similar to summer in Finland and was perfect for racing.

Local fans were equally revved up for the race.

Amir Hamzah Hasim, 46, was with a group of 30 colleagues from a manufacturing company in Shah Alam, who are all fans of Ferrari.

“I’ve been following the F1 for seven years, but this is my first time watching it live,” said Amir.

“It’s interesting to observe new technology, the engine performance and other technical aspects of the race. We also get to watch world class drivers live in action,” he said.

Other attractions within the venue included the F1 Village, housing vendors selling souvenirs.

There was also an F1 simulator race open to the public, with a chance to win exclusive paddock tickets.

Despite the excitement, tragedy was not forgotten.

A ‘Wall of Hope’ for passengers and crew of the missing flight MH370 stood near the entrance, while hundreds of visitors signed their names and wishes on it.

At 4pm, I sat at my seat near the pit stop for the flag off.

As a show of respect and solidarity, the crowd and racers observed one minute’s silence before the race to honour the passengers and crew of the ill-fated MH370.

The race began with a roaring of engines, enough to get anyone’s heart pumping.

The crowd cheered as within a matter of seconds, the race cars had zoomed past us and were off on the track.

Watching a race live is definitely an unforgettable experience and completely different from watching it on TV.

A giant LCD screen mounted near the pitstop building kept us updated on drivers’ progress around 56 laps over 120 minutes.

When Hamilton clocked in at first place the crowd roared their approval with a standing ovation.

Some fans crowded down to the circuit during the prize-giving ceremony, eager to snap a winning photo, while others celebrated on the stands with much cheering and waving of flags.

Hamilton, who celebrates his first win in Sepang, dedicated the victory to those affected by the MH370 tragedy.

The crowd exited in an orderly manner after the race, while others got ready for international DJ Calvin Harris’ party at the SIC helipad later in the evening.