A notable street of many facades

Jalan Bendahara or Wolferstan Road, is a bustling area for locals and has become a must-visit destination for tourists.

JALAN Bendahara in Malacca, one of the historical city’s main roads was obviously named after Tun Perak, the most eminent of the ancient Sultanate’s courtiers who held the rank.

Historians have traced the word bendahara to the Sanskrit bhandarin or the keeper of the store.

As trade played a vital role in the sultanate with the rulers, the Bendahara was effectively the royal treasurer, besides being the head of the court officials, the leader of the soldiers and the peasantry.

The position of Bendahara was second only to the Sultan in status, power, and authority.

But then again, there is also another key road named Jalan Tun Perak that stretches from the Jalan Malim junction to Jalan Gajah Berang/ Jalan Hang Tuah.

So, in addition to the illustrious Tun Perak, one can suppose that Jalan Bendahara could also have been named for these other not-so-famous holders of the post — Tun Perpatih Tulus, Raden Bagus, Raden Anum, Tun Perpatih Besar, Tun Perpatih Sedang and Tun Perpatih Putih.

The older residents of Malacca recognise it by its former name of Wolferstan Road. Not many, though, are familiar with whom it was named after.

Littleton Pipe Wolferstan arrived in Malaya as a cadet of the British colonial office on Dec 3, 1889 and served in various posts in Penang, Singapore and Kedah before being appointed to four terms as Resident of Malacca between 1910 and 1920. The St Peter's Church, the oldest functioning Catholic Church in Malaysia, is among the rich landmarks of Jalan Bendahara.

His last job in the colonial service was Resident Councillor in Malacca, where he was much respected.

On March 9, 1922, a week before Wolferstan left for retirement, a grand dinner was hosted by the Malacca Chinese Chamber of Commerce and the Straits Chinese British Association (SCBA) in his honour.

“Malacca has today, better medical services, electric lighting, a splendid site on which is being erected a badly needed municipal market, two new roads added to that part of town and what more, a good and handsome revenue.”

Besides being rich in culture and cuisine, Jalan Bendahara is also steeped in history, involving both the hallowed and the profane and linked to kindness as well as cruelty.

One of the country’s hallowed Christian places of worship is located on it and down the road there used to be the town’s party spots and a hidden hub of sin.

At the start of the road, at the junction of Bunga Raya Pantai, stands the St Peter’s Church, the oldest functioning Catholic church in Malaysia, built in 1710.

The church, which has a life-size alabaster statue of Jesus before the Resurrection, is most crowded during the Holy Week celebrations for local Catholics and members of the Malacca Portuguese community.

Since the mid-1800s, many non-Christian locals have also been taking part in the observations, especially Palm Sunday, the Stations of the Cross (Datuk Pikul Balak) and The Lord is Dead (Datuk Mati).

Further down the road, at the junction of Jalan Munshi Abdullah, is the rather unremarkable grey-painted Meng Seng Charitable Association Hall.

Not many people know its historical contributions to the local community and to the birth of the nation.

The association, set up in June, 1923, was at first located in a shoplot in Lorong Bukit China before moving to Kee Ann Road, and then to Bunga Raya. The Meng Seng Charitable Association Hall has played a significant role in the local community as well as the fight for Independence.

Locals went to the association for medical aid, cultural performances and to read books provided by its free library. There was also a night school for adults.

The present building was completed in 1941 but soon after the opening ceremony, the Japanese Occupation turned it from a hall of mercy into a chamber of horrors.

It was the base of the dreaded Japanese Kempeitai and among the local Chinese leaders massacred were the association’s committee members Ong Teck Ghee, Lim Tai Tian and 50 ordinary members.

The hall also played a significant role in the quest for Merdeka. In early 1954, Tunku Abdul Rahman returned home from London sad and disappointed after his first failed mission to gain independence.

Tunku called for an emergency meeting in Malacca for the struggle to go on and the only place big enough to accommodate the large number of people who turned up was the hall.

The response was overwhelming. When sheets of cloth were stretched out to collect donations, people threw in their jewellery — gold chains, rings, brooches and such — along with watches and cash.

The amount of money raised spurred similar appeals throughout the country, enabling the Tunku to make another, more successful trip, in April 1954.

At the start of the stretch of Jalan Bendahara across the road, there used to be two grand landmarks on either side. One end of Jalan Bendahara  is most famous for being Malacca's 'Little India'.

On the right was the majestic Capitol Theatre and the right, the splendid mansion of Chan Koon Cheng, a prominent merchant of Malacca who built a fortune as a rubber planter.

The Chan Koon Cheng mansion stands to this day, complete with its lion-guarded gateway, exquisite architecture and features, despite being turned into a CIMB Bank branch.

Alas for the Capitol, it’s all in ruins. The most impressive movie theatre of my childhood days is now derelict and roofless.

But before it was a cinema, the building had a colourful history as the Capitol Dance Hall. Opened in 1936, it was touted as “Malacca’s one and only most up-to-date palais de danse”.

There were nightly dances and the waltz, quick step, foxtrot, tango and cha cha were the craze then.

Tea dances were held on Thursday and Saturday.

The floor was lit up by orange and green lights concealed in the ceiling — surely a technological feat then, while the sound system was said to be among the best in the country.

English writer and poet Hugo Williams immortalised the hall in his book All the Time in the World.

He wrote that the Capitol might as well have been the Commonwealth Relations Office in the late 1950s when troops from New Zealand, Australia and Britain were still in the barracks of the Terendak Camp.

“In the hall, whites aided natives with vouchers called dance coupons. But natives were only obliged to stay faithful to whites while the music lasted. Then they would declare their independence, or rather break off diplomatic relations again”. 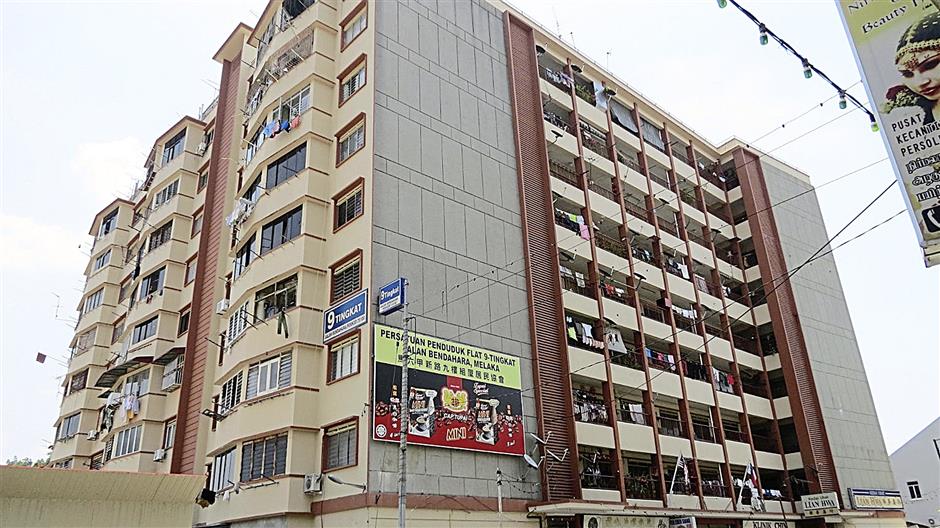 During the 60's this block of nine-storey municipal flats was the tallest building in town.

Thanks to the Commonwealth soldiers, Jalan Bendahara was also dotted with bars and hotels and midway on the left side of it was what the locals used to call “Coconut Island”, a seedy squatter village where vice was the prime business.

During the mid-60s, Jalan Bendahara also gained fame for having the old city’s tallest building — the nine-storey municipal flats.

It later gained notoriety for its growing number of suicides but has since ended up as just another crammed housing area in town.

Today Jalan Bendahara, or its junction with Jalan Temenggong, is most famous for being Malacca’s “Little India”.

Most of the traditional Indian businesses — shops selling jewellery, sarees and other clothing, sundry goods, prayer items and flowers, among others — are located on both sides of the street.

The city’s most popular banana leaf eateries can also be found in the area.

The oldest is Sri Lakshmi Villas, set up in 1962, which serves vegetarian and non-vegetarian food, in addition to thosai, idli and other traditional foods. It still has the same proprietor — K. Periakaruppan aka PK, 79.

Over five decades, the restaurateur has seen Wolferstan Road transform from what it was before to what it is today — a bustling area for locals and a must-visit place for tourists.