SIBU: The number of people taking up big bikes as a hobby here is definitely on the rise if the registration figure of Razz Chopper Motor Club is anything to go by.

The body, the only of its kind in town, has recorded an increase in membership from 40 to 80 boosted by the organisation of the annual Sibu Bike Week, which began in 2011.

“We also have many Chinese joining the club. This is a good indication that the club is a multiracial one,” Club founder and president Abdul Razak told reporters during Razz Chopper’s third anniversary celebration here on Saturday night.

On the prerequisites of becoming a member, Abdul Razak said one must have at least a high-powered motorcycle with minimum engine capacity of 250cc.

“We even have some members owning Harley Davidson models with 1,700cc engines, of which a unit can fetch a price of RM130,000 or more,” he said, adding that the Kawasaki brand of big bikes were more common and affordable. 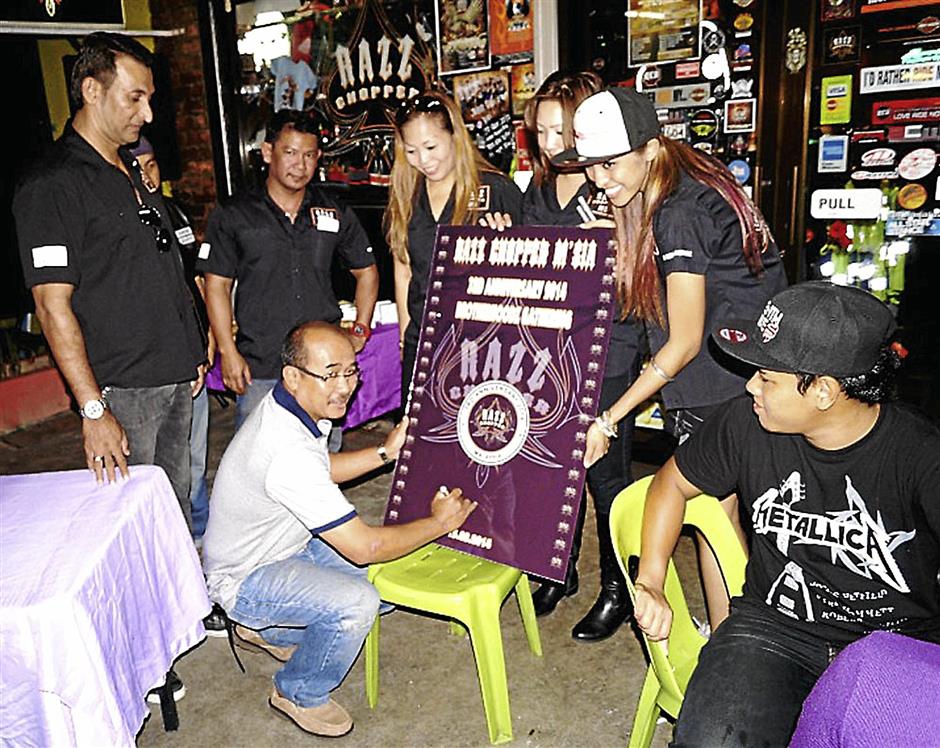 Token of remembrance: ACP Mohd Kamal signing the club banner as Abdul Razak (left) and other members look on

On a question as to why Sibu Bike Week had been held every end of the year regardless of it being the landas (monsoon) season, Abdul Razak said this was to avoid the clash with other activities being organised during the earlier months.

“Plus by having the event during year-end, we can draw larger crowds as the period coincides with several festive occasions and the long school holidays,” he said.

Abdul Razak believed that the Sibu Bike Week had gained the reputation of being the “hottest” big bike event in South-East Asia.

Last year, it attracted participants from across Borneo, Peninsular Malaysia, the Philippines, Thailand, Singapore, Bandung (Indonesia) and even from as far as Dubai in the United Arab Emirates.

For this year’s edition, Abdul Razak said the venue would be at Sibu Town Square Phase II from Dec 5 to 7.

Dressed in their identifiable black leather jackets and black jeans, the enthusiasts met at Rafaee Café around 6pm before going for a 40-minute roaring ride around town.