Although all Chinese celebrate the Lunar New Year, also known as the Spring Festival, certain practices are unique to a particular dialect group and reflect the beliefs and origins of their ancestors.

In Malaysia, however, as the various dialect groups live in close proximity to each other, assimilation has taken place and thus, their unique characteristics have blurred over time.

“I think assimilation has taken place gradually since the 1980s as Chinese of various dialect groups live close to each other.

“We celebrate the festivals together and influence each other,” said Centre for Malaysian Chinese Studies deputy director Chiam Yan Tuan.

“While interaction and integration are a good thing, the dialect groups risk losing their identity. 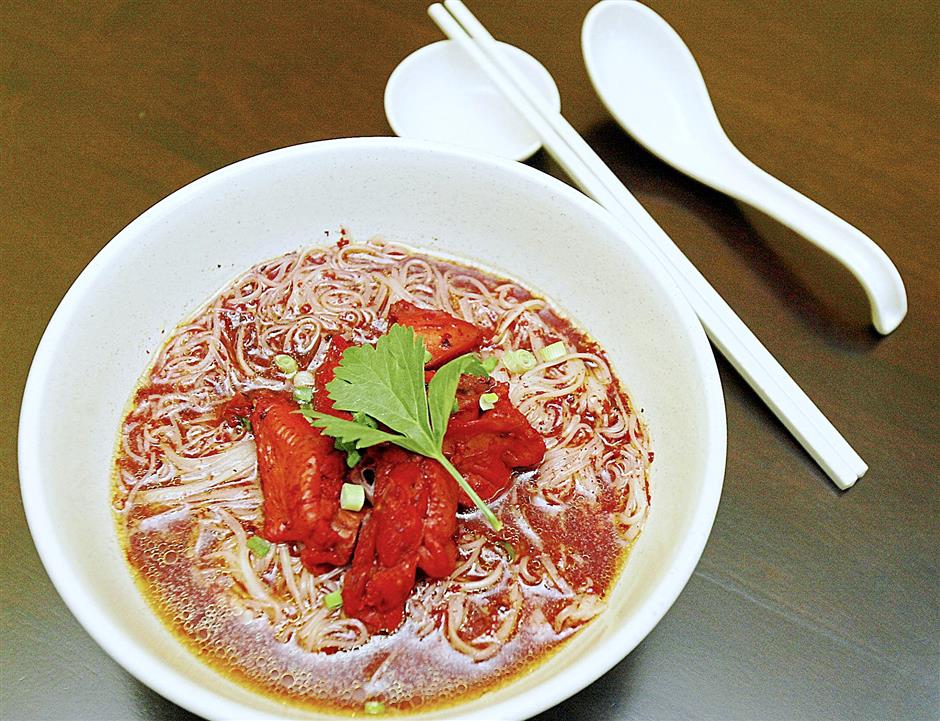 The Foo Chow Red Glutinous Wine Chicken Soup with Longevity Noodles is a must-have dish on the first day of the Lunar New Year.

“In culture, we strive for pluralism to achieve sustainability. We want to see many sub-cultures to make the culture rich and vibrant. Having a rich cultural heritage is a nation’s wealth,” he added.

“Hence, it is hoped the unique characteristics of the various dialect groups, especially when celebrating major festivals such as the Lunar New Year, can be preserved through education and active engagement as well as research,” said Chiam.

He added that clan associations had been playing a pivotal role in promoting and preserving the culture and customs, but there might be a disconnect with the young generation who were not aware of their importance.

StarMetro spoke to experts and senior citizens to find out what makes Chinese New Year for each dialect group unique.

Many have the impression that lion and dragon dances originated from the Guangdong province in China, but retired scholar Dr Chia Oai Peng said this was a misconception.

However, she said the dance became popular in Guangdong and then spread to other parts of the world through martial art practitioners such as Wong Fei Hung.

Dr Chia said the People’s Day, which falls on the seventh day of the first lunar month was a significant occasion observed by the Cantonese to mark the day humans were created. 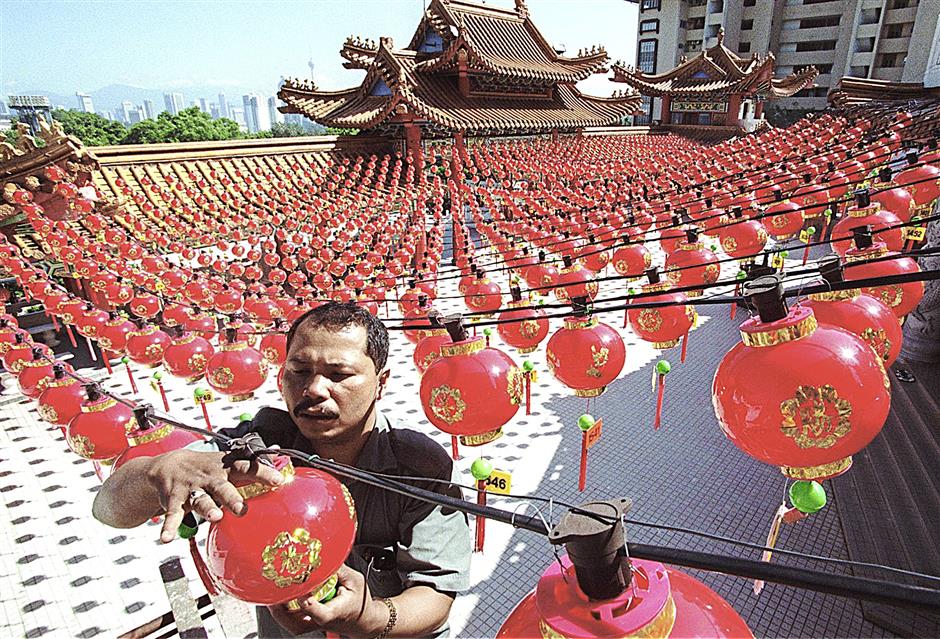 She also noted that the Cantonese paid close attention to dishes served during the reunion dinner, which have to have good meanings to usher in the new year. Among them are dried oyster (good news), black moss fungus (prosperity), fish (surplus) and spring onion (intelligence).

“It is also a practice for the Cantonese to not finish the rice cooked for the reunion dinner to signify the continuity of balance.

“After the dinner, the seniors will present ang pow to the young ones to be placed under the pillow to protect them from evil spirits.

“On the first day, the young ones will serve tea to the elders and they will all pray to the ancestors, heaven, earth and gods,” she added.

Selangor and Kuala Lumpur Foo Chow Association head of women section, Lin Siew Chin said the noodles would also be served with two hard-boiled eggs to wish for the well-being of the diner in the coming year.

Apart from that, she noted that the Foo Chow’s Year Cake was different from the usual brown Cantonese version, as it is white, comes in a huge piece and can be either sweet or savoury. 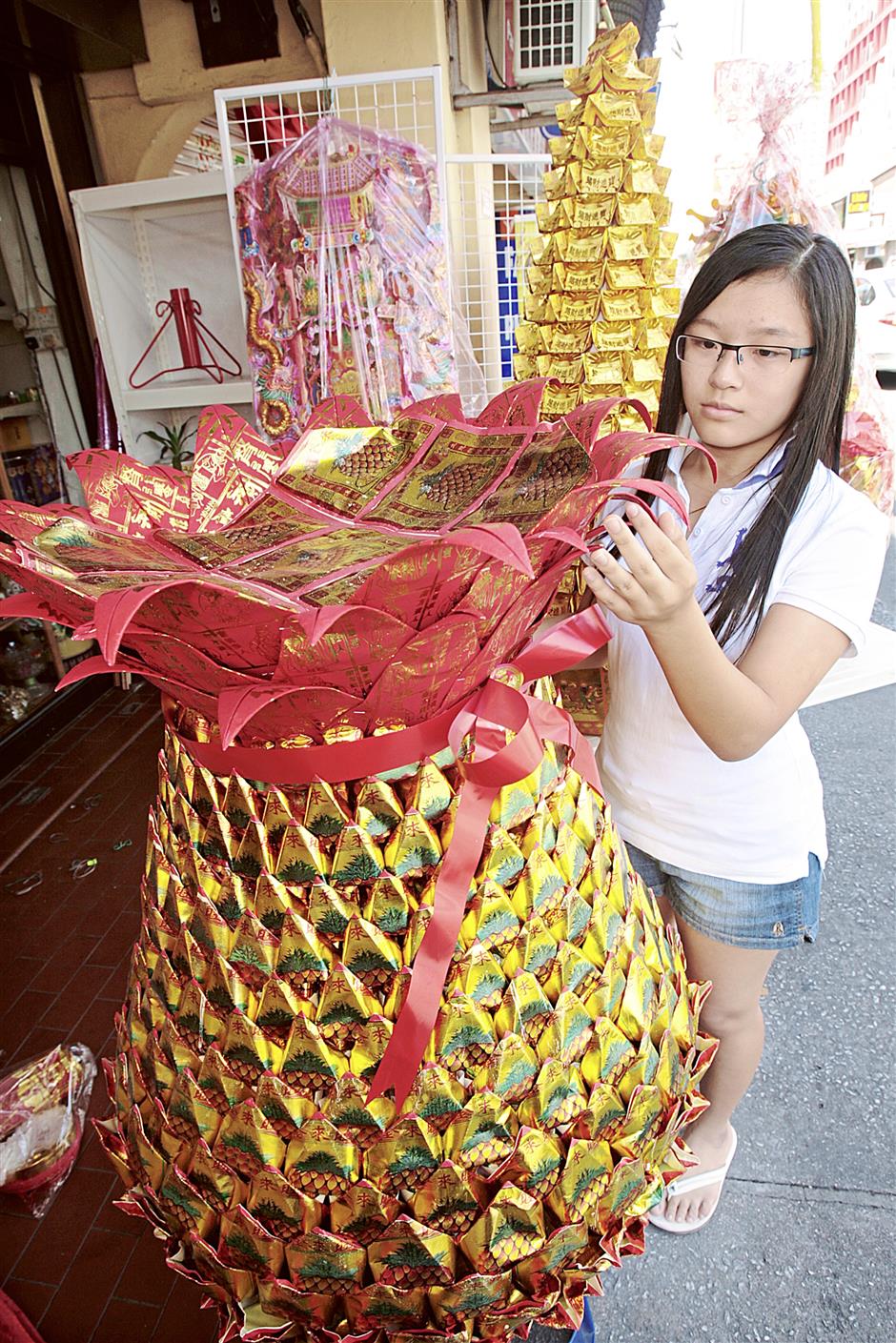 Pineapple is used by the Hokkien group during prayers and for decorations because the name sounds like the coming of prosperity.

“Although FuZhou is the capital of the Fujian (Hokkien) province, the people there observe a different set of practices during Chinese New Year,” she said.

She added that traditionally, only the youngest in the family received ang pow, but this had changed.

Also notable is that the Foo Chow dialect group celebrates the 29th day of the Lunar New Year traditionally as a day of filial piety. They will prepare a sweet congee called “AoJiuZhou” using red date, peanut, water chestnut and other ingredients for the elderly.

She said the best way to distinguish Guangxi descendants from their Cantonese neighbours was from the food served. 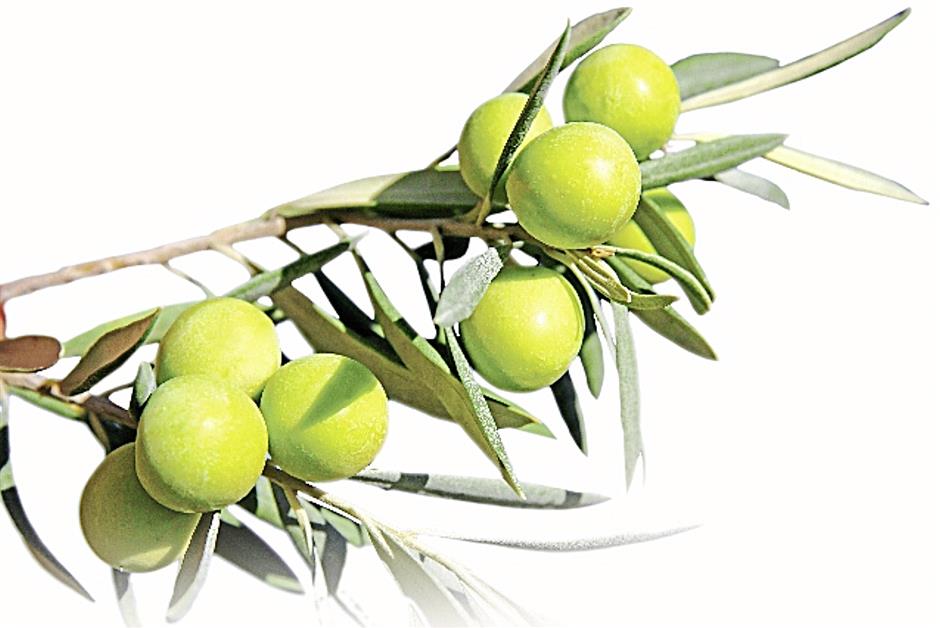 Olives are widely used by the Teochew group, especially when exchanging gifts with friends.

One of the most important activities during Chinese New Year for the Hainanese is to visit the Thean Hou Temple after the reunion dinner.

“Thean Hou temples pay homage to Ma Zhu, the goddess of the sea, whom the people on Hainan Island pray to as they live and work near the ocean,” said Federation of Hainan Association Malaysia vice-president Datuk Lim Chiew Ah.

Lim, who is also Penang Hainan Association chairman, said traditionally, villages in Hainan would perform the Dance of Bowls and Plates by forming a procession and moving to the rhythm with the items in their hands.

“There will also be puppet shows amid the sound of fire crackers, and people in the village will also compete to be the person to light the lanterns, which sound like offspring in our dialect,” she added.

“This, however, is not really observed in Malaysia. What we have, for a touch of tradition, are delicacies such as Poached Chicken, Pork Belly Soup, Stir-fried Pork Rinds with Pineapple and mixed vegetables,” said Lim.

The Hakkas view the 20th day of the first lunar month as extremely important. They call it the “Tian Chuan Re”, which means the Broken Sky Day, when they pay tribute to the goddess NuWo who patched up the broken sky according to Chinese myth.

Selangor and Kuala Lumpur Fui Chiu Association president Russell Chia said on this day, the Hakkas gather to pray to heaven, make and savour New Year cake, and have a feast. 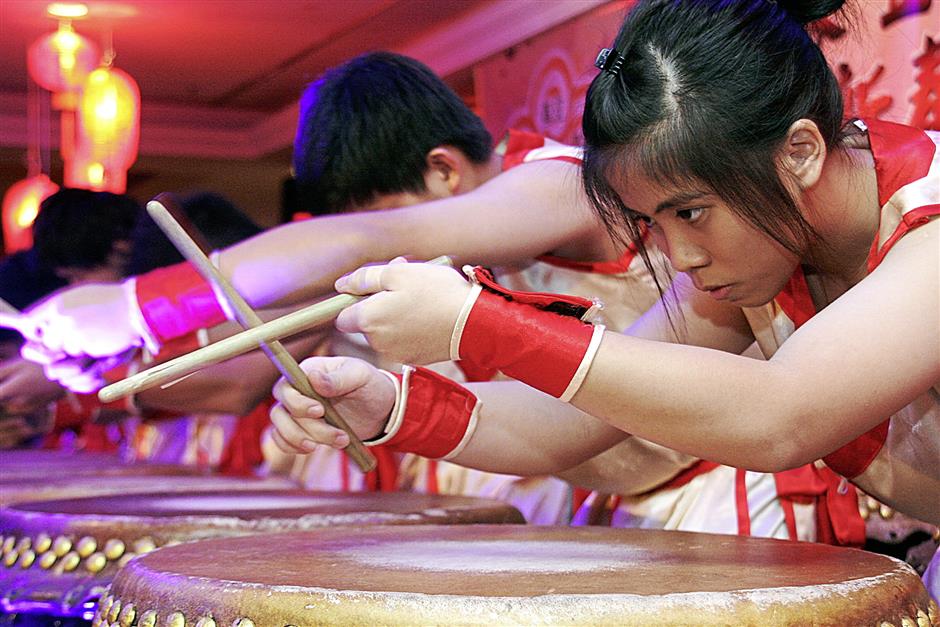 “The Hakkas, who are traditionally nomads, believe that this day signifies birth, continuity of life and a new start,” he said.

He added that just like Chinese of other dialect groups, the Hakkas clean their houses and start preparing dumplings for Chinese New Year on the 24th day of the last lunar month. They also send off the Kitchen God on that day.

Vegetable buns, vegetable dumplings and special kuih such as fa ban and xi ban are served on New Year Day. Pickled vegetables are widely used in the dishes savoured during auspicious days, while Yam Abacus Beads, Wine Chicken and Salted Chicken are some must-haves.

“During the reunion, we save fish heads for the elders to respect their status, chicken wings for youths so that they can be high-flyers and fish eyes for schoolgoing children so that they will be clever,” Chia added.

There are about eight sub-dialect groups hailing from Fujian province, and they should not be generalised as Hokkiens, opined a Malaysian professor based in Taiwan, who prefers to remain anonymous.

The customs written about here are practised mainly by the southern Hokkiens.

The ninth day of the first lunar month is the most important day for southern Hokkiens, and some organisations in Klang and Penang declare it a holiday for their staff.

The celebration will start from 11pm the preceding day as in the Chinese calendar, that is the beginning of a new day.

Amid fireworks, Hokkiens pray to the heaven, or the Jade Emperor said to be the ruler in heaven, at their porch as it is believed that the heaven is the almighty who will watch every action of man. No idols are involved in the prayer.

Sugar cane is a vital element in the prayers as according to legend, Hokkiens hid in a sugar cane farm and remained unharmed when pirates attacked their village. Besides, the cane stalk with multiple nodes also symbolises continuous growth.

Pineapple is used during prayers and for decorations because the name sounds like the coming of prosperity.

The Hokkien’s kee ah kuih that can be made into both sweet or savoury delights is a must-have. Other Hokkien cakes such as theang ku kueh (red tortoise cake) and huat kueh (steamed rice cake, also eaten and used as prayer offering by other dialect groups) are common during Chinese New Year.

The professor also noted that a unique aspect of Hokkien tradition is their respect for women.

“A Hokkien proverb says ‘the Jade Emperor rules the Heaven, on Earth we look up to JiuMuGong (mother’s brother)’, this shows that the maternal side of the family is very important. Also, the grandmother always leads the prayers and is the first person to give out ang pow to everyone in the family,” he added.

United Malaysia Teochew Association secretary-general Lim Keh Kuan said the Teochew way of celebrating Chinese New Year was almost the same as other dialect groups, but the use of olives during prayers and greetings set them apart from the rest.

“Olives are widely used, especially when we exchange gifts with friends as a symbol of courtesy. It was also a premium fruit once presented to the emperor. They will be included in the gifts together with mandarin oranges,” he said.

Traditionally, the Teochew used areca nuts but it was replaced with olives after the Qing Dynasty.

Lim said the Teochew would celebrate the People’s Birthday that falls on the seventh day of the first month with seven types of dishes.

“We also view the 15th day of the New Year as imporant. To us, it is the Festival of Lights and lanterns will be hung to mark the occasion,” he added.

As for reunion feasts, Lim said they liked to have steamboat, which is a time-honoured practice in the Chaozhou province where the weather is cold during the festival.

The Teochew Perng Kueh and other kuih with different fillings add to the festivities.