EVEN with the bad press of several people being lost or seriously injured, Bukit Tabur in Taman Melawati, Gombak continues to attract avid hikers as well as thrill seekers. But, experts have advised caution when attempting to tackle the challenging hill.

On Jan 5, a search-and-rescue team spent 12 hours to rescue female hiker Noor Hasmahani Hashim who was stuck in a tree after falling 10m down a ravine.

This and numerous other cases over recent years have called into question the safety of hiking up Bukit Tabur. Bukit Tabur in Taman Melawati, Gombak is popular among hikers because of its scenic view overlooking the Klang Gate Dam and the KL skyline.

A spiny quartz ridge hill in northwest Kuala Lumpur, Bukit Tabur, or Bukit Hangus as it is also known, is part of the Klang Gates Quartz Ridge, the longest and oldest quartz ridge in the world, said geologists.

Due to its vicinity to the city centre, many hikers regularly attempt to climb the hill on weekends.

“The view from the top is beautiful and the hike can be done in half a day, so that is why many hikers are drawn to it,” said K.M. Leo, 50, a regular hiker on Tabur. “But you can’t afford to make a mistake on Tabur.

“Its rugged terrain, razor-shaped rocks and vertical drops are unforgiving. All it takes is a slip and you could tumble like a rag doll into the ravine.

“Use common sense and most importantly go with someone who is familiar with the trail and never go on the trail at night,” said Leo.

On steep sections, hikers have put up safety ropes to help climbers but these ropes are not maintained regularly, said Eric Ng Yoke Foo, 64, who has been hiking in Tabur regularly for the past nine years.

“The two rope sections on Tabur West are where most accidents happen,” said Ng, who has been involved in many search-and-rescue operations. 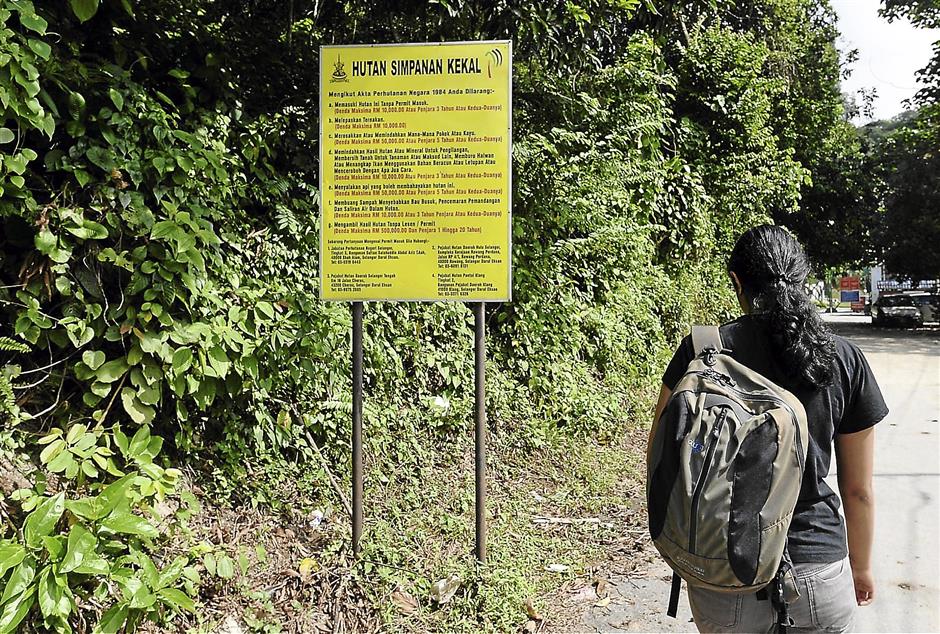 A sign by the Selangor Forestry Department at the barely visible entrance to Bukit Tabur in Taman Melawati indicates that a special permit is needed to enter the forest.

The reckless and idiotic behaviour of some hikers had also prompted some regulars to start a blog (http://bukittabur.blogspot.com) to promote safety in Tabur since 2009.

Volunteers have put up photo illustrations with step-by-step instructions on how to tackle the challenging stretches and the proper footwear for the slippery rocks.

“The authorities should put up warning signs on some of the dangerous sections,” said Leo, a former Pathfinder Group coordinator for the Selangor branch of the Malaysian Nature Society (MNS).

“At least people would be extra careful on the trail. After all, we can’t stop hikers from going to Tabur.”

According to the Selangor Forestry Department website, interested hikers are supposed to obtain a permit to enter the forest from the Selangor Tengah Forest Office at a cost of RM5 per person.

There are two entrances to hike up Tabur, both located near the gates of the Klang Gates Dam.

“Sometimes, it is because hikers underestimate the hike up Bukit Tabur as the terrain is very challenging. Only hikers who are fit and experienced should attempt the climb.

“Another reason is because the hikers are not properly equipped. For example, because of its rocky terrain, normal trek shoes are not adequate as they do not have enough traction.

“Many who trek up to watch the sunset also fail to bring torchlights for their trip down once it gets dark,” he said.

For those undeterred from hiking Bukit Tabur, (MNS) head of communications Andrew Sebastian said general safety guidelines should be observed. 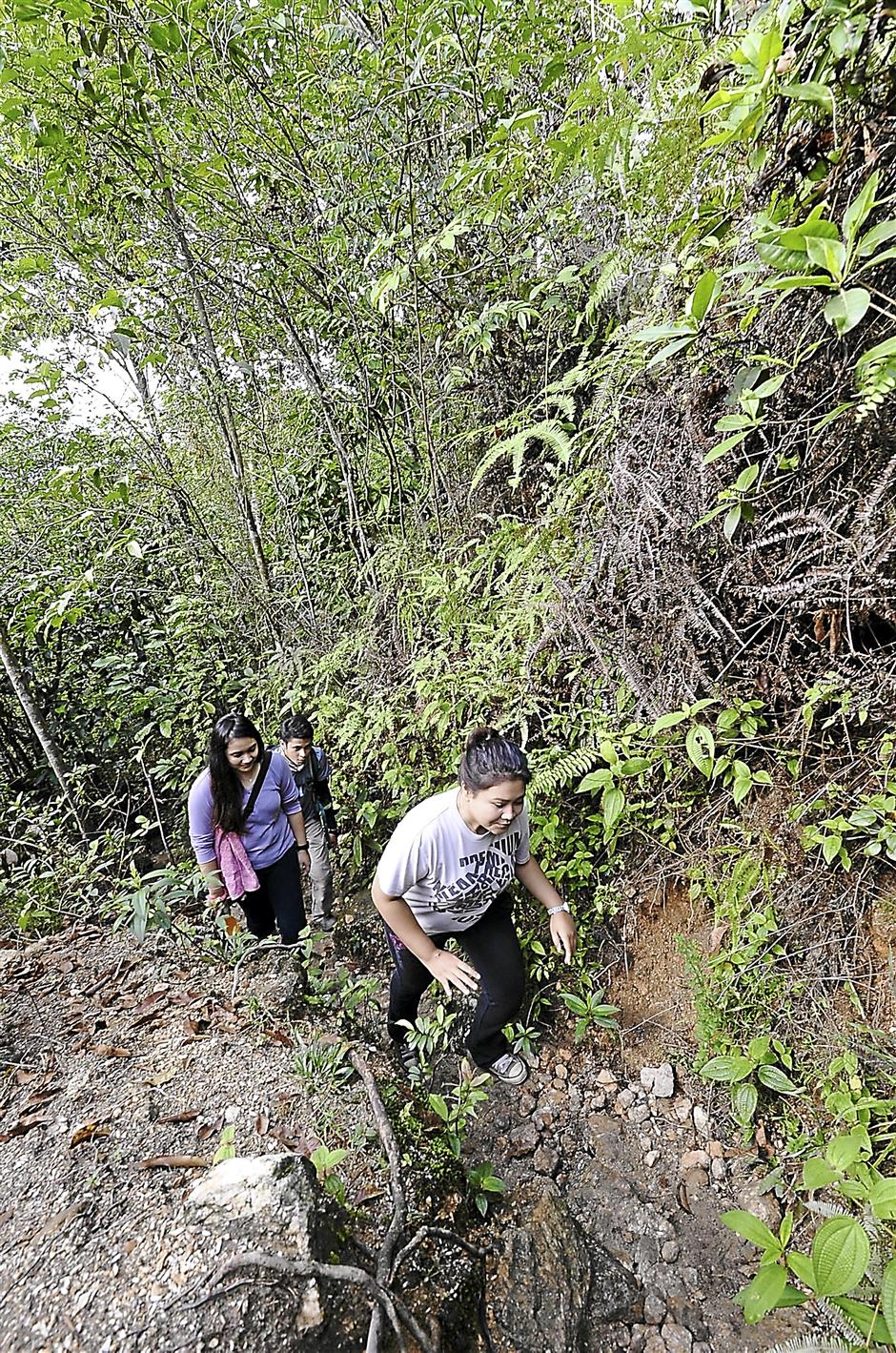 Tricky steps : The hiking trail at Bukit Tabur can be treacherous as it is narrow with no railings to prevent hikers from falling.

On whether it was advisable for hikers to continue hiking Tabur after the many fatal incidents, Andrew said: “With proper preparation and mindfulness, most accidents can be avoided.”

“The trail path is quite narrow and full of jagged rocks which protrude from the path, making it very dangerous. Many times, we found that people fall off the edge because of the unpredictable soil conditions.

“Sometimes, when the soil is soft and hikers tread along the hillslope, the edge crumbles away and they slip off. Other times, they may have lost their step and sustained serious injury from the jagged rocks,” Kaha said, adding that should hikers find themselves lost, they should remain in the same spot until help arrives.

He also said that railings should be installed at strategic locations to prevent further mishaps.

On plans to upgrade Bukit Tabur, MPAJ Corporate Planning department director Rosliza Mohd said they planned to construct an arch and gazebo at the entrance to the hill.

“The state government has allocated some RM51,000 to build the two features and a meeting will be held soon,” she said.

However, Rosliza also said that any upgrade to the trail itself would fall under the Forestry Department’s jurisdiction. 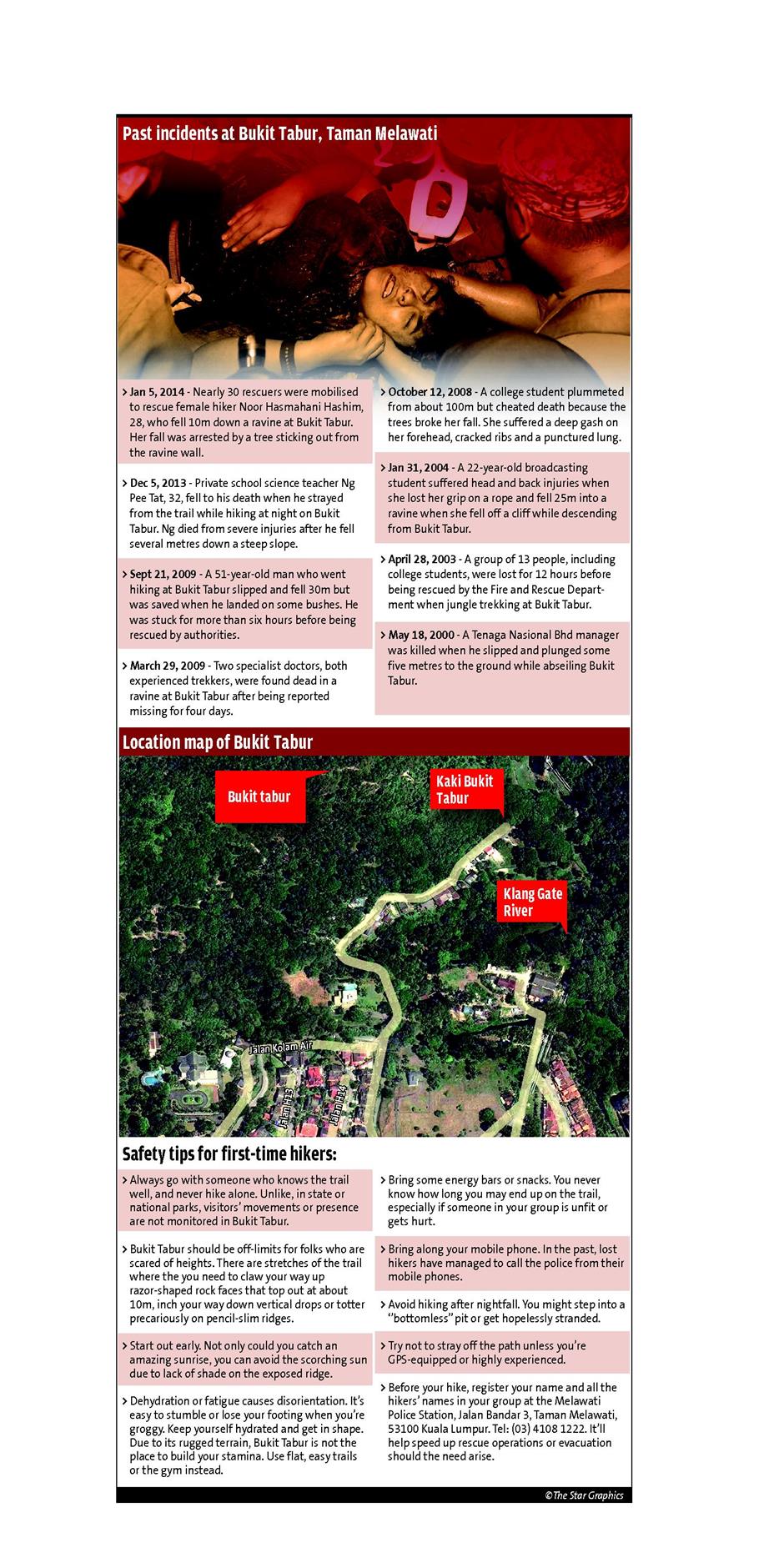 Meanwhile, Shaffie added the department was currently in the process of upgrading the area, especially the ropes used to climb down the steep slopes.

“However, we do not have any plans to install railings as this would limit Bukit Tabur as a venue for rugged sports,” he added.