KUCHING: Sarawak recognises the importance of private hospitals as they complement public hospitals, which are often plagued with overcrowding woe.

Chief Minister Tan Sri Abdul Taib Mahmud said private hospitals and practitioners were most welcome to set up centres and institutions in the state as it would help the Government ease the problem of shortage and inadequacy in healthcare.

“That (shortage and inadequacy) is something we all know in Sarawak and throughout the country, especially in healthcare. Even now, we in the Government do not profess to have done what we would wish to fulfil — to satisfy the requirements of our people.”

“Nevertheless, we are trying our best and if it is not our best, we can certainly say that devoting consistently around 5% of our Gross Domestic Product (GDP) to healthcare, and putting healthcare in the government budget, which shares almost top spot with security and education,” he said during the official opening of the Borneo Medical Centre (BMC) in Simpang Tiga here yesterday.

Taib said that the Government alone would not be able to cope with the rising expectation of the people in providing healthcare.

Apart from geographical challenges and distances, the Government had to also consider the sheer size of the state as well as the scattered population.

“In the rural area, we know that our (Sarawak) healthcare differs quite a lot from the peninsula. First, we have to bridge the gap of distance because our people are scattered all over in nearly 5,000 villages and longhouses, and also we are just beginning to build infrastructure to link them all.

“Whatever we do, it is a slow process that even till today in spite of all the efforts, only 85% are linked with basic infrastructure like roads, electricity and clean water.

“Because of the scattered nature of our population, we in Sarawak have devised many ways, travelling boat dispensaries, even flying doctors, which are not normally found in the country, of course normally found in Australia, which solves the same problem of distance. And that is how we are trying to cope with the problem of giving fair and widespread health services to our people,” said Taib.

He praised the enterprising efforts of BMC managing director Dr Peter Tang and BMC chairman Dr John Chew for setting up the fourth private hospital here as this showed that the people had begun to understand the importance of healthcare.

“It is very heartening to see that the rich among us have recognised the difficulties that we have to face in providing adequate services to the people. In the sprit of understanding, they (the rich) have resorted more and more to private practitioners, and now they have responded very well by organising themselves in teams that can run a hospital.

“To me, it is a laudable undertaking and I welcome enterprising young doctors Dr Tang and Dr Chew in their efforts to play a role in our society. I would like to say to you all to get that enterprising spirit, well done and may you succeed,” said Taib.

The total investment on the building and equipment is RM80mil. It is equipped with an advanced MRI scanner — one of only two in the state. The other one is at Sarawak General Hospital. 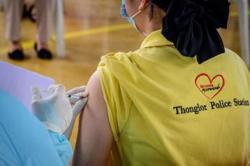