DATO Keramat Road is not part of the George Town heritage area but it is surely one of the most important and recognisable main roads on the island.

Depending on which direction you come from, the road begins from the heart of the city centre and ends at Air Itam.

It is a busy road but not many Penangites today are familiar with its history.

The word “keramat” usually refers to a shrine dedicated to a holy man or ascetic of the Muslim faith.

It is said that there was once a Muslim settlement in the area, and the link probably refers to Kampung Makam, a Malay village located along Dato Keramat Road.

Kampung Makam, which has existed since around 1840, began as an Acheenese settlement founded by a religious teacher named Haji Kassim.

Despite the ongoing development, the village has retained its kampung-like ambience in the heart of the city. 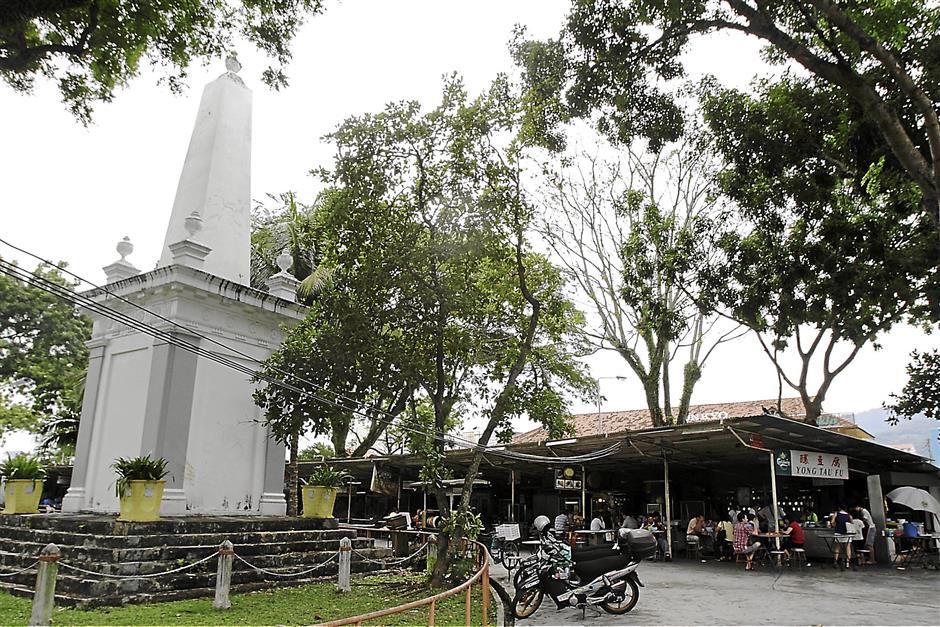 Brown Memorial: This memorial was erected in memory of David Brown, who donated the land on which Padang Brown is located.

According to Timothy Tye, who blogs on streets of Penang, at one time, the people could travel to the settlement by sampans along Sungai Pinang.

“At that time, it was known as Pengkalan Haji Kassim, after the pier built by Haji Kassim for sampans to berth at the settlement. Haji Kassim also built the village mosque, now known as Masjid Haji Kassim,” Tye wrote.

“It is still in existence today, and is accessed from Jalan Datuk Keramat. The village was only renamed Kampung Makam after the demise of Haji Kassim, as it then began to be referred after the mausoleum or makam of Haji Kassim.”

Driving along the main road, one is unlikely to see the significance of this urban village, which has managed to keep its charm and identity.

There used to be a cinema located next to the turnoff to Kampung Makam. This was the Federal cinema where I spent much time with my only Chinese-educated brother, Wong Chun Sang, watching countless Hong Kong sword-fighting movies produced by Shaw Brothers.

It is now home to the Federal Place Chinese Restaurant but in the 1970s, come every Sunday, my brother would take me on his motorcycle to Federal cinema.

It was here that I entered into the amazing world of flying swordsmen with the likes of Wang Yu, David Chiang, Ti Lung, Chen Kuan Tai, Fu Sheng and Lo Lieh.

I was then in primary school, and like the rest of the world, I was also swept away by the movies of another legendary martial arts exponent — Bruce Lee with his unique kung fu skills.

Now, going to the cinema means having popcorn and carbonated drinks but in those days, at the Federal, for example, we could have either lok lok (small bits of food on skewers), steamed groundnuts, sotong bakar (grilled squid) or sweet barbecued meat buns.

Outside every cinema, there will always be an Indian man with his tray of salted peanuts and yellow kacang putih.

In some cinemas, a woman would walk along the aisle, selling ice cream in the dark while the movie was in progress. 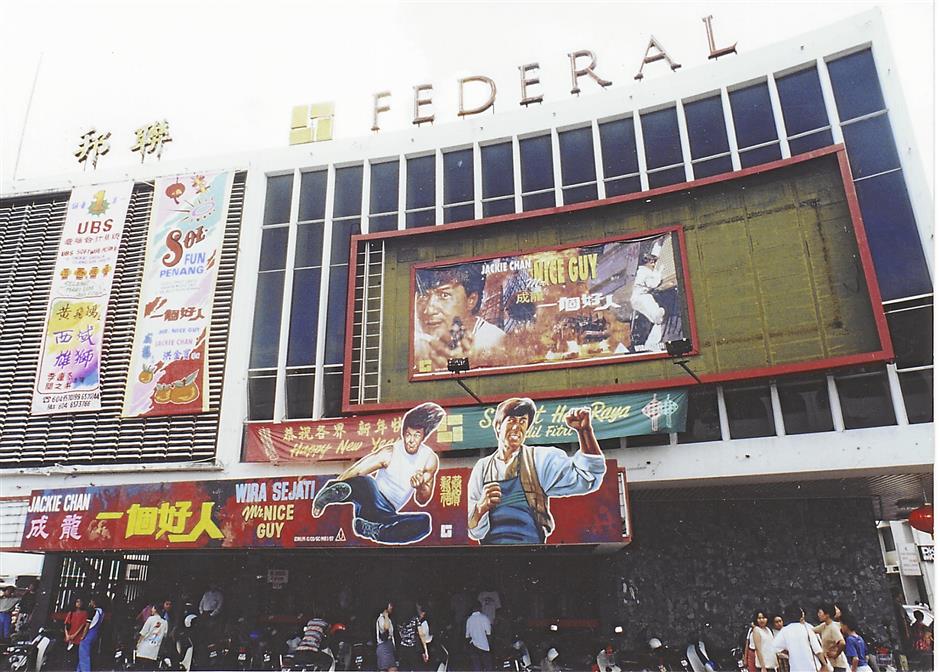 Source of entertainment: The Federal cinema used to be located next to the turnoff to Kampung Makam.

One item which the cinema-going generation of those days will surely remember is the kuaci or sunflower seeds. Of course, cinema-goers were not particularly civic-conscious those days and sweepers had to come in between the showings to clean up.

Another iconic building in the area is the 78-year-old Convent Datuk Keramat, which was founded by Rev Mother Tarcisius.

According to a blog posting, the CDK, as it is popularly known, was founded on Jan 14, 1935 by Tarcisius, who arrived in Malaya in 1904 from England. She believed that education should not be limited to English only but should be provided according to the needs of the society.

It is at CDK that my wife, Florence, studied for 12 years, where she excelled in sport and represented the school as well as the state in athletics.

Just opposite the school is Padang Brown, as it is known to older Penangites, but is now known as Padang Dato Kramat.

It is widely known and reported that it is at this padang where some of the greatest Malaysian football legends used to train and play in the 1960s and 1970s.

They included the Bakar brothers — Ali and Isa, Shukor Salleh, Mohamad Bakar, Desmond David (the father of Nicole David) and the Abdullah brothers, Namat and Shaharuddin.

The padang was also famous for a unique game where bets were placed for anyone to shoot at goal. However, the winner was not the one who shot into the goal, but the one who could hit the goal posts.

Just down the padang is the City Stadium, built in 1956 by the British government, and was known for its “Keramat Roar.” Significant landmark: Dr Sun Yat Sen’s residence in Penang. His family used to live here when he was in exile in Penang in 1910. — Khoo Salma Nasution’s Sun Yat Sen in Penang.

“The land on which Padang Brown is located was donated by David Brown, one of the wealthiest landowners in Penang. A Scot from Edinburgh, Brown came to Penang in the early 19th century to join his fellow countryman, James Scott, who was the trading partner to Francis Light,” wrote Tye.

“After Light’s death, his business passed into Scott’s hands, and in turn the businesses passed to Scott’s junior partner, David Brown. Brown eventually became one of the wealthiest person in Penang as well as the largest landowner, with plantations and estates throughout the island.”

The hawker centre is divided between the halal and non-halal sections.

The Penang-styled poh piah, with its generous wrapping of crab meat and roe, is certainly the best in the state, if not Malaysia. Here you can also have the Penang-styled yong tau foo, Chinese pasembor and ais kacang. The Padang Brown hawker centre remains one of my all-time favourite eating spots in the state.

If you wish to try one of the better known char koay teow in Penang, then just look for Ah Leng’s stall at Café Khoon Hiang opposite Federal Place, which opens in the morning until late afternoon.

Another important historic fact about Dato Keramat Road is that the Father of Modern China and the First President of the Republic of China, Dr Sun Yat Sen, and his family, used to stay there when he was exile in Penang in 1910.

Until the 1970s, the house still existed and I would pass by this derelict home each time I travelled home on the bus.

It never occurred to me the significance of the house as it was never given the attention that it deserves.

According to Khoo Salma Nasution, in her book, Sun Yat Sen in Penang, Dr Sun, together with his first wife Madam Lu Muzhen and two daughters, Sun Yan and Sun Wan, lived there. The girls attended school at nearby St George’s Girls School. His second wife, Chen Cuifen, would to join him in Penang later.

“When Dr Sun’s family was living in Penang, they could not even afford to pay their monthly house rent of $20. The Penang supporters discussed Dr Sun’s situation and undertook to provide his family with $120 and $130 each month for their living expenses,” she wrote.

Dr Sun would take a third wife, Soong Qingling, in his later life. May Ling, the youngest sister, married the late Chiang Kai Shek, the president of Taiwan, and eldest sister, Ai Ling, married HH Kung, one of the richest men in China then.

Who would have imagined that a simple main road in Penang would have such great stories, involving so many giant personalities, to tell? Hopefully from now, as we pass through this busy thoroughfare, we will give some thoughts to these people.