The power group notified the JV — a partnership between Sinohydro Corp and Sara-wak Cable Bhd’s Trenergy Infrastructure Sdn Bhd — on its intention to award the two packages worth a total of RM618.6mil, in late August.

“The commencement date for both the packages shall be on Nov 15 this year, or at a such later date as may be notified by SEB,” Sarawak Cable said in a filing with Bursa Malaysia.

Work for the two packages was earlier targeted to commence on Oct 1.

Sarawak Cable said the two packages were expected to contribute positively to group’s earnings and net assets for financial years ending Dec 31 next year and 2015.

SEB has awarded four other packages of the 500kV transmission line backbone project to international and local contrac-tors. All six packages are worth about RM1.2bil.

The contract awarded to KEC Interna-tional Ltd is for the proposed Mambong and Entinggan 275kV substation extension.

He said other components would comprise new power substations and connecting towers.

The project, which is expected to be fully completed by 2016, will support the future development of SEB’s generating system and provide a strong security of supply to the fast expanding customers within Sarawak Corridor of Renewable Energy (SCORE) areas.

SEB’s 944MW Murum hydroelectric dam is expected to channel its first power into the state’s transmission grid in third quarter of next year.

Impoundment of the dam’s reservoir commenced a month ago and is expected to take between 12 and 14 months for the water level to reach the minimum level for turbines to operate and generate electricity.

To increase its production capacity, SEB has planned for a 600MW coal-fired power plant in Balingian, Mukah Division as well as several other new hydroelectric dam projects in the state’s central and northern regions. 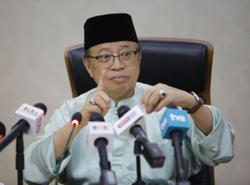 Covid-19: S'wak aid package to be extended until year-end