IT was a grand show of athleticism and intense competition that saw five outstanding bodybuil-ders emerge triumphant over their rivals.

The inaugural Mr Benak, held on the sidelines of the annual Benak Festival in Sri Aman, received an encouraging response, with some 60 contestants vying for spots in five categories during the preliminary rounds last Saturday.

Inspired by seasoned national bodybuilder and Sri Aman native, Buda Anchah, the outing aimed at becoming a platform for established athletes to promote the sport among locals, which in turn could help unearth new talents.

In this respect, Buda sought assistance from the Malaysian Bodybuilding Association (MBA) to organise the first-ever Mr Benak competition.

“The Mr Benak championship has been Buda’s idea that revolves around bringing something new to the annual festival. It is also hoped that the competition would be held as an annual event because it is a national bodybuilding event. Strong rivals: Malvern (right) and Firman in action during the Open Under-70kg final.

“We also brought several Malaysian bodybuilding icons to Sri Aman to give more hype to the event,” a statement from the association said.

Apart from Buda, two-time world titleholder Wong Hong and Malaysia’s first international female bodybuilding champion Lilian Tan also came to Sri Aman to show support for the event as well as to inspire the local folk in the sport.

“We hope that bringing in these outstanding sportsmen to the festival would encourage more people, especially among youths, to lead healthier and more active lifestyles. It is a very interesting sport that can instil discipline and hard commitment in everybody,” MBA said.

Of all the categories, the Manhunt seemed to be the crowd’s favourite event, according to MBA.

“The Manhunt, also known as the Mr Body Beautiful, Mr Physique or Mr Fitness, has grown to become very popular among bodybuilders, especially the new faces.

“It’s a great entry level event, as you can see in this Mr Benak that it is the category with the most contestants,” the organisation stated.

Of all the contenders, Louis Glass came out on top, bagging the Manhunt title along with the RM1,000 cash prize.

“It was a great win, especially after not making the cut for Mr Sarawak this year,” the 35-year-old mechanical chief told The Star. He said clinching the title boosted his enthusiasm to have another go for Mr Sarawak next year.

“It has certainly given me the confidence,” he said.

The Iban muscleman, however, finished fourth in the Closed Under-70kg category, which saw three-time Mr Sarawak champion Malvern Abdullah as the victor.

“It was intense, especially when you are on stage with these champions — Malvern, Densi (Runya) and Wilfred (Harding). Compared to them, I’m still a rookie. Still, I’m so inspired to follow their footsteps in bodybuilding.”

For Malvern, he felt that Mr Benak served as a great platform for him to prepare for the national-level Mr Gym 1Malaysia in Kuala Lumpur this Oct 25-27. 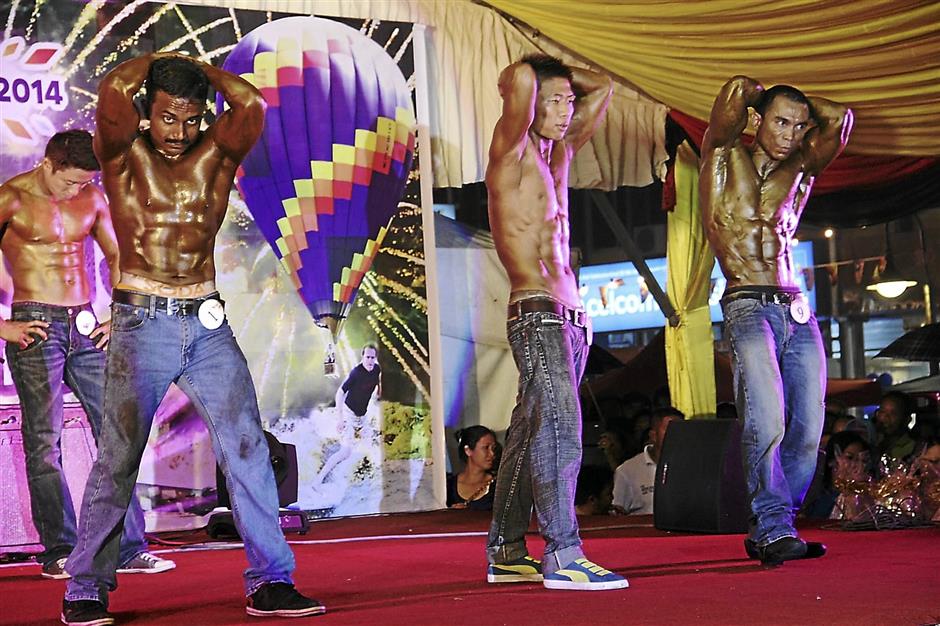 Body beautiful: (From right) Louis, Chii Geng and Sivanesvaran flexing it out before the judges.

The seasoned bodybuilder came out tops in both Closed and Open Under-70kg events.

“I’m happy to win the Closed category and placed second in the Open. I must admit that it was a very stiff competition between myself and the Open champ, Firman Raynar. I believe it was a 50-50 chance.

“Nevertheless, I’ll be up against Firman again in the Under-65kg of Mr Gym 1Malaysia next week and hopefully, I would be able to claim that title,” the 38-year-old lecturer said.

Judges for the competition were Buda, together with 10-time Mr Malaysia and representative of the MBA, Osman Yahaya and Murugan Gananam from the Royal Malaysia Police.