Francis Forkey Doe (in red and yellow) surrounded by defenders from the S-League Selection.

He was also impressed with the cheerleading group’s performance before the kick-off of the main match between Selangor and the S-League Selection at the Shah Alam Stadium recently.

“The Sultan also congratulated the students for putting up an entertaining display in front of the fans. Singapore’s High Commissioner to Malaysia Ong Keng Yong had also commended the cheerleading group for their exciting performance,’’ said Abdul Karim.

The cheerleading performance by students from five schools — SMP Sri Aman Petaling Jaya, Sri Kuala Lumpur, SMK Seafield, SMK Bandar Utama 4 and SMK Damansara Jaya — was one of the highlights of the 12th edition of the competition.

About 70,000 fans, including a few hundred from Singapore, had flooded the stadium to watch the annual encounter between Selangor and Singapore. 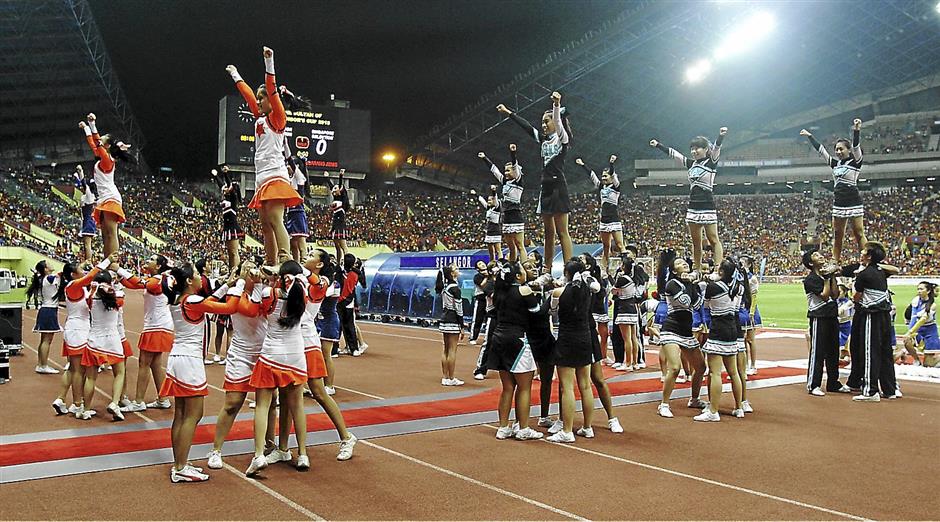 Acrobatic performance: An exciting display by the cheerleading group.

The Sultan was also happy with Selangor’s victory.

Selangor, despite not having qualified for the quarter-finals of the Malaysia Cup competition played exceptionally well and defeated the S-League Selection 3-2 to win the prestigious Sultan of Selangor’s Cup for the sixth time. Selangor’s goals came from Adam Griffith and Francis Forkey Doe (2) while Aleksander Duric and Jozef Kaplan replied for the S-League Selection.

In an earlier curtain-raiser, Singapore Veterans edged their Selangor counterparts 1-0 with the only goal coming from Rafi Ali.

Abdul Karim said the rating certainly proved that the competition was popular among Malaysian football fans.

“We were quite skeptical of the response as there were other matches on the same day. But we succeeded in getting about 70,000 fans at the stadium and 1.4 million TV viewers watching the telecast. The figures are encouraging and motivating,” said Abdul Karim.

Sultan Sharafuddin initiated the competition in 2001 to foster better relations between Selangor and Singapore.

Then, it was known as the Regent of Selangor Cup. With the coronation of the Sultan in 2003, the competition was renamed the Sultan of Selangor’s Cup.

Abdul Karim said there were some negative feedback on security at the stadium. Joy: Adam celebrating with his teammates and hugged by his captain Mohd Asraruddin Putra Omar after he scores the equaliser.

“We acknowledge that there were some problems. Some enthusiastic fans had brought in flares and fire-crackers.

“We don’t want similar incidents to mar the reputation of the competition in the coming years.

“We will be working closely with the police to ensure security in strengthen.

“The police are aware of the situation and have promised to look into the matter,” he added. 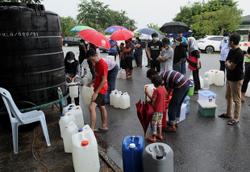 Nip the problem in the bud