TEMERLOH: Three nightspots operating in the guise of a “restaurant” were raided by police under the on-going Ops Noda and Ops Cantas operations to rid bad hats and illegal activities in the district.

“During the operations at the Temerloh industrial estate in Mentakab, 66 customers patronising the three premises had their urine tested for drug abuse.

“They were released after having their statements recorded,” he told a press conference here.

ACP Abdul Aziz said checks showed all three outlets had no licence to operate as a nightspot but as a restaurant.

He said loud disco music were played and the foreign women were all dressed up in sexy attire to accompany patrons.

“We found there was no food served in all the three premises which was a clear violation of its permit.

“Our surveillance reports showed the women were offering sexual services for between RM150 and RM280 per session,” he said, adding that those who wanted overnight service were charged a fees of RM600.

ACP Abdul Aziz said investigations showed the three outlets also extended its “extra services” to other nightspots in the vicinity.

He said all the foreign women had no working permit and entered the country using social visit passes.

“Several foreign passports and a booklet recording the daily attendance and income were also recovered,” he said.

ACP Abdul Aziz said the case would be investigated under Section 4(1)(b) of the Entertainment Enactment 1993 for operating without a valid licence, which carries a fine of up to RM10,000.

He said the foreign women would also be investigated under Section 39(b) of the Immigration Rules 1963 for violation of their social visit passes.

The offence carries a jail term of up to six months or a maximum fine of RM1,000 or both, upon conviction.

In addition, the premise owners and caretakers face a charge under Section 56(1)(d) of the Immigration Act 1959/1963 for employing foreigners without a valid permit.

If convicted, each illegal person can be fined up to RM50,000. For more than five persons, the penalty carries a jail term of up to five years and six strokes of the rotan.

ACP Abdul Aziz said police viewed such immoral activities seriously and more raids would be conducted from time to time to eradicate such menace from flourishing. 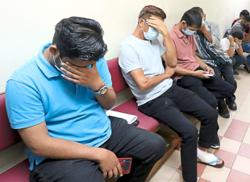