The Declaration of the Formation of Malaysia on Sept 16 1963 at the Central Padang, which is now Padang Merdeka.

HAVING lived through some of the most tumultuous moments in the state’s long and colourful history, former political secretary Datuk Seri Dominic Dagok can indeed be counted among one of the longest serving patriots in Sarawak.

Being the last surviving member of the Inter-Governmental Com–mittee (IGC) that was set up in January 1963 to draw up special safeguards for both Sabah and Sarawak due to increasing pressure from the communist insurgency and other threats to the founding of Malaysia, Dominic remembers the hardships that followed soon after.

“Let’s start at the beginning, in 1962, when the Cobbold Commission was first set up. Headed by Lord Cobbold, the commission was responsible for determining the opinion of the people in Borneo, namely British-Borneo (Sabah) and Sarawak,” he told The Star in Kuching.

“The commission wanted to ensure that it would be a comprehensive report taking into account the wishes, views, opinions and comments of all the people of the two states. The findings were then handed over to the respective governments of Sabah, Sarawak, Malaya, Singapore and Great Britain.

“Now, the IGC` was set up soon after, and chaired by Lord Lansdowne. This committee was responsible for working out the details of the findings in accordance with the recommendations contained in the Cobbold Commission report. I served in this committee in the Public Service Sub Committee,” he recalled.

Dominic also revealed an interesting anecdote back before Malaysia was formed, in terms of the naming of the proposed federation.

“I had suggested several times in the Council Negeri Meeting and appeared before the Cobbold Commission in the Main Court House at Pangkalan Batu and proposed that the name of the proposed federation be Borbrusima. 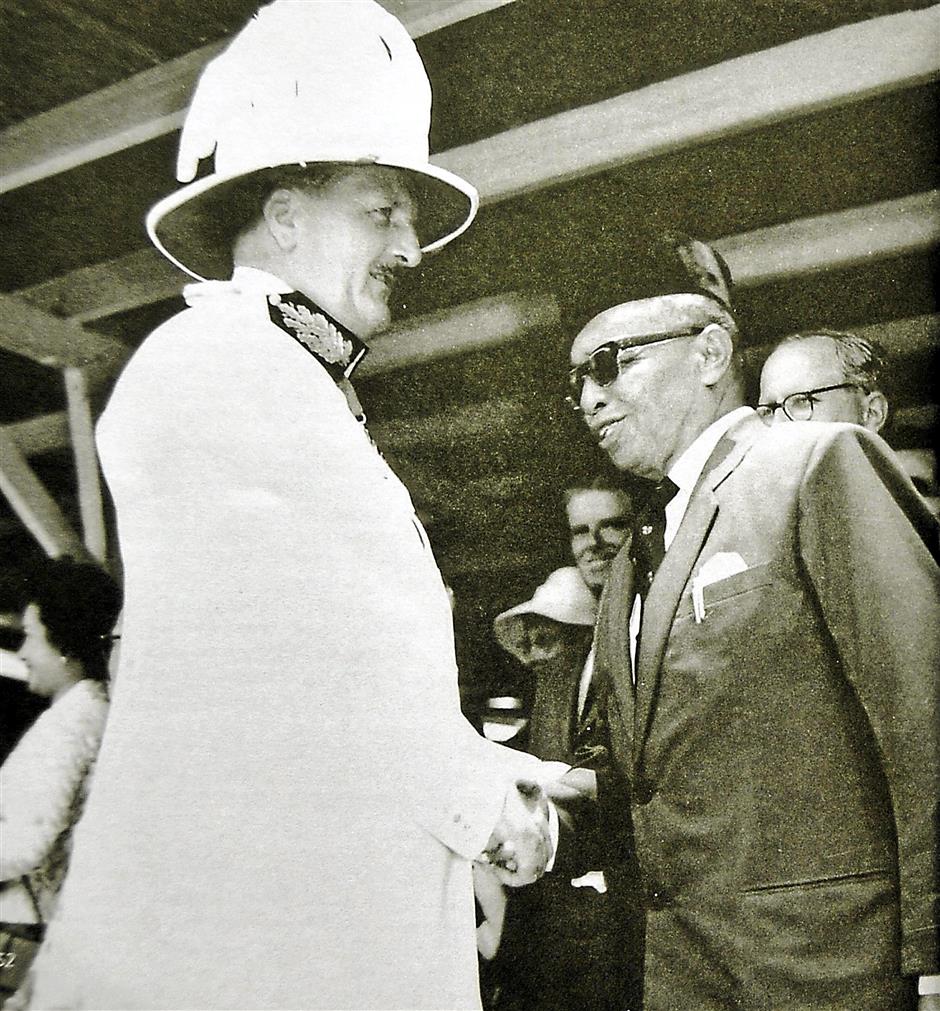 “BOR would stand for Borneo, BRU for Brunei, SI for Singapore and MA for Malaya,” he said.

Unfortunately for Dominic, this wish would not come to pass.

The aged but spritely gentleman of 80 years then took some time to remember what it was like facing the numerous threats the nation had to face after its formation.

“The first several years of Malaysian history were marred by the Indone-sian Confrontation, the communist insurgency, claims to Sabah by the Philippines and Singapore’s secession from the federation on Aug 19, 1965.

“I remember the Indonesian Confrontation quite vividly. Those living some 27km to 30km from the Indonesian-Malaysian border dug holes underneath their houses for shelter in fear of the enemy.

“When a signal flare was fired into the air by the authorities or soldiers, these villagers scrambled as fast as they could into their holes to take cover. This signal was seen whenever there was any sign of the enemy. Sometimes these holes were filled with water but the villagers had no choice and were soaked from head to toe,” he sighed.

“How dreadful and difficult those times were! Those living near the border were plagued with problems and difficulties, which only got worse when curfew was enforced by the authorities.”

“The Sarawak Communist Organi-sation’s activities did not make things easier either. In small, isolated areas, things were especially bad. “In the end, the government of the time began targeting potential hiding spots of these communists where they would resupply such as in Siburan, 17th Mile, Beratok 22nd Mile, Tapah 24th Mile and areas along the Kuching–Serian road.

“During these hard times, the people of these areas had no roads, no proper water supply, no electricity, no schools and no clinics. Now I am happy to see our relatives and friends living in these areas with scenic villages, tar sealed roads, fully treated water supply, electricity and so on and so forth,” he smiled.

Dominic also stressed the importance of instilling in today’s youths the same patriotic pride many of the older generation had back then.

“I urge the youths of today to make as many friends as possible regardless of race or religion, learning as much as they can from each other and open up their minds to discussions.

“Work hand in hand with the government, hold dialogues and discuss how to better carry on the spirit of unity, harmony and patriotism forward into the future. Now, in the present day, is the time to come together as one, as a nation, and put aside our differences to celebrate Malaysia Day,” said Dominic.

“The aspects of unity, harmony, stability, peace and prosperity must be preserved at all costs. Remember our history, remember the sacrifices of those who came before us and stand proud as Malaysians.”

Related stories:
Think of environment in plans for future growth, says don
The struggles for the Motherland
What Sarawakians say this Malaysia Day
Colourful variety of flags sets Sarawak apart from other states