IT IS a norm to see fake goods being sold here in Johor Baru. The sight is so common, government buildings are not spared from peddlers trading their fake goods.

Checks by StarMetro showed that there were two kiosks at JB Sentral where the Customs, Immigration and Quarantine (CIQ) Complex is located.

A variety of goods ranging from counterfeit handbags, fashion accessories, eyewear and T-shirts were sold openly.

Previously, there were about eight such kiosks operating there in June last year.

Kiosk operators even resorted to keeping the products out of sight and selling them behind a counter behind the stalls after the issue was highlighted by The Star last year. Curbing counterfeits: Thousands of counterfeits are being confiscated by the state and piled up to be destroyed. — filepic

These are counterfeit products that were produced in bulk, mostly imported from China, Bangkok and South Korea and they cost only a fraction of the original ones.

Customers can take their pick from a range of replica luxury bags including those from French, German, Italian and even British labels.

The price of the items starts from as low as RM19.90 for a patent leather coin purse to as high as RM169.90 for a replica handbag from a major label.

The stalls are also see selling a wide range of fake branded sunglasses from various brands at RM150 per pair.

A salesgirl our reporter met said it was their “best-selling design”. 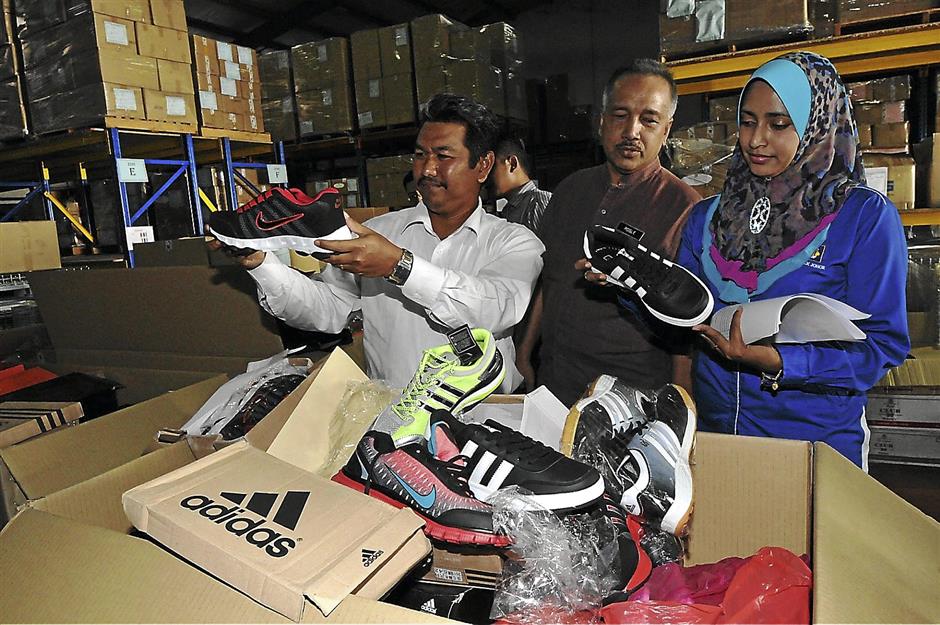 Online stores are also offering a wide range of “authentic” replica items and shoppers are willing to spend up to hundreds of ringgit for the fake items.

A Singaporean shopper in her 50s who declined to be named said she was a regular customer at the stalls selling replica handbags in JB Sentral.

The lady said she had her eyes set on a brown number with gold accents buttons, saying that the workmanship was good and that the bag looked “cute”.

“I do not really care about the brand as long as the design is nice,” said the seasoned shopper, who was carrying tote bag with monogrammed prints on it.

When asked about the price, she was willing to pay for such handbags, she said she would haggle for a better buy.

A salesgirl at one of the stalls who identified herself as “Rita” said that the bags that are sold at her stall were of AA grade, which meant that they were of the average quality.

“Our goods differ in quality as some are from Thailand but most of them are from China,” she said, adding that she could make an average of 10 sales per day, mostly to Singaporean customers who pass through the CIQ.

A peddler at the JB Bazaar who wanted to be known as Eddy said fake goods such as bags were sold at RM60 at his stall.

And when it comes to discounts, the trader said that he could only offer a minimal cut as margins were small.

“Every other stall at the bazaar sells fake handbags and competition is tough but we will give a 10% discount if the customers bought more than two items,” he said.

Eddy also said that the sling bags in candy colours are not produced by their original designers.

“These are really appealing to my customers who are mostly teenagers.”

Shopper Cynthia Tham, 29, said that she does not understand the need for people to purchase fake handbags if they could not afford the real ones.

“I rather not own any luxury handbags than to buy a fake one and get embarrassed around my friends who can obviously tell that it is fake,” she said.