State Tourism, Coastal, River and Island Development deputy chairman Datuk Ghazale Mohamad said the erosion was considered a phenomenal occurrence for the state as the erosion almost reached the homes of coastal residents and Malacca Club sport facilities in the area.

“We have initiated several meetings with the relevant agencies to embark on remedial measures as soon as possible,” he told Star Metro.

He said the technical coastal engineering center under the purview of Irrigation and Drainage Department (DID) will be roped in to provide technical advice and measures to be embarked.

“We have to look into solving erosion problem through coastal protection work and to rehabilitate the site as it affected the livelihood of local fishermen,” he said.

Ghazale said on the part of the state government it would execute coastal erosion project to avoid further damage and expedite the Environmental Impact Assessment (EIA) to initiate remedial works at the site without any hiatus.

On the long term he noted the state would also prepare structural designs for coastal erosion protection after all necessary data on the erosion were obtained.

“The erosion has threatened properties and economic activities along the beachfront, hence remedial measures were imperative to mitigate the threats in affected areas,” he said.

Malacca Club manager Alex Cheng said his management had allocated RM100,000 for the remedial works at the site.

He said the work was considered temporary awaiting approval from the state government to carry out the complete job to rectify the damaged site.

Cheng said the club took the matter very seriously as the erosion could cause further damage to the club’s facilities.

“We expect the retaining wall to be completed by next five days where it will be a short-term measure before obtaining approval from local authorities to further reconstruct the area,” he said.

Cheng also divulged that this was the first time such erosion occurred probably due to changing pattern of the waves influenced by ongoing reclamation works at the nearby stretch. 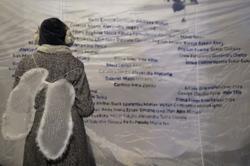