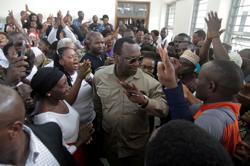 GEORGE TOWN: A tuition teacher was jailed five days and fined RM1,800 by a magistrate’s court here for shoplifting RM1,057 worth of clothes from an apparel shop in a shopping mall.

Ooi Poh Kiat, 45, from Taman Impian Alma in Bukit Mertajam, pleaded guilty to committing the offence at around 8.30pm on Monday at Cotton On in 1st Avenue here.

He admitted to stealing 14 men’s shirts and six women’s skirts worth a total of RM1,057.

Deputy Public Prosecutor Mohd Khairul Fairuz Rahman told the court that Ooi had been slapped with three previous shoplifting charges in March, May and July 2011 in Bukit Mertajam.

He said Ooi was jailed a day and fined RM2,000 for the charge in March 2011 and told reporters that he did not know the penalty for the other two charges when asked later.

In mitigation, counsel R. Sankra Krishna said Ooi had problems with an Ah Long (loan shark) which caused him to be depressed.

“At that time, he was feeling tension causing his mind to go blank and he did not know exactly what he was doing. He stole but it was not for his own gain.

“He is remorseful for what he did,” Sankra Krishna said, adding that Ooi has two children aged 13 and 15.

Magistrate Norhayati Ibrahim ordered Ooi to serve the jail term from the date of his arrest on Jan 7 and a default of one month in jail if he failed to pay the fine.