MBPJ sets up committee to act against owners of abandoned houses

What’s going on?: This house in Section 12 has a signboard placed outside it, citing a proposal to have it reconstructed. During StarMetro’s visit to the site, no construction-related activities could be seen but someone was spotted camping in the premises.

THE Petaling Jaya City Council (MBPJ) has set up a committee to monitor abandoned houses and punish owners who had left the task of maintaining the houses to the council.

In order to punish the errant owners, the committee, headed by MBPJ councillor for Section 21 Jeyaseelan Anthony, has decided to enforce Section 74 of the Local Government Act 1976 during its second meeting recently.

The Act states that any person leaving a building or land in an unmaintained state, covered in undergrowth and is harmful, shall be guilty of an offence and shall on conviction be liable to a fine not exceeding RM1,000 or to a term of imprisonment not exceeding six months or both.

There will be a further fine not exceeding RM100 for each day the offence is continued after conviction.

“We are going to enforce this existing law and will trace the owners through their assessment bills as well as do searches at the Land Office,” he said.

Although this solution is temporary at best, the committee is looking at the possibility of confiscating property from owners who have yet to pay their dues or those who are untraceable.

MBPJ has realised that it can no longer maintain the upkeep of abandoned houses when the task should clearly be the responsibility of homeowners.

Jeyaseelan said the problem had been present for many years but local councils had not taken strict action against houseowners.

Most of the properties were abandoned due to a number of reasons including legal entanglement, lack of funds for maintenance, owners that could not be traced or have died, buyers that purchased property for development but were unwilling to spend money until construction is ready to begin and abandoned projects.

“Maintaining the upkeep of these properties is not MBPJ’s routine job. Yet we do it for the safety and health of the residents in the neighbourhood.

“Snakes, lizards and mosquitoes are commonly found while drug addicts have been spotted at some of the abandoned projects and houses,” he said.

Jeyaseelan said it was a shame that taxpayers’ money was going to waste due to the irresponsible attitude of some owners.

He added that MBPJ usually hired a contractor to assist in maintenance and the bill was charged to the homeowners’ assessment bill.

Despite the local council’s efforts, some houseowners have yet to pay their outstanding bills.

MBPJ has been benevolent and helped many complainants such as Ponnu Damodharan, 80, who lives beside an abandoned house that has been falling apart slowly for over 10 years.

The tiles would fall off on its own after a downpour, waking Ponnu in the middle of the night.

Ponnu, a resident in the vicinity since 1968, has spent hundreds of ringgit repairing her chimney that is linked to the said neighbour’s.

“The chimney was falling apart and causing water to seep into my kitchen. I had it fixed for RM600 two days ago.

“I am just scared the whole roof might collapse soon. Our beams are connected, so I could be affected if something bad happens,” she said.

Ponnu said the grass had not been cut in a long time and she feared it would catch fire if not taken care of soon.

She added that MBPJ would cut the grass after receiving complaints, but the problem would recur after two weeks.

Another resident in Petaling Jaya, who wished to be known as Chang, said the property beside her house had been abandoned for a number of years but the owners could not be traced.

Chang, who has grandchildren staying with her, was worried for their safety as snakes had been spotted in her house.

MBPJ councillor Derek Fernandez, who did a paper on the matter said there were several possible methods to tackle this issue.

“Effective solutions rely on the fact that under the Local Government Act 1976, the local authority can take action unilaterally to abate and rectify the problem on private property that has been left in an abandoned and derelict state so as to protect the public interest.

“Furthermore, the local authority can recover the cost of this with the threat that the land can be sold to recover the same if it is not paid.

“Action can also been taken in some circumstances to have the land forfeited,” as stated from an excerpt of Fernandez’s study.

“The real solution to the problem of abandoned and derelict buildings and houses lies in the forfeiture of those lands under the National Land Code (NLC).

“It is an implied term under the NLC that all buildings must be in a habitable state.

“Failure to maintain the same renders the land liable to forfeiture.

“While the old practice was to actually state this on the title, this important condition was left out when they computerised the land regisrty, but even so, it is still implied under the NLC and has legal effect,” said Fernandez.

He added that while the local authority had the power under the Local Government Act to enter a premises and abate the nuisance caused by the abandoned building and recover the cost from the land owner by levying the same as a charge on the land like unpaid assessment, the process was cumbersome, time-consuming and not effective against serial offenders.

“If you cannot look after your property and cause nuisance to others by leaving it abandoned and in a derelict state, then you are not fit to own it and it should be taken away forcibly by the state government under the NLC and alienated to someone more responsible through a fair and transparent process.

“I believe the state government has such power under the NLC and should use it,” he added.

Related Stories: RAs back move to go after irresponsible houseowners 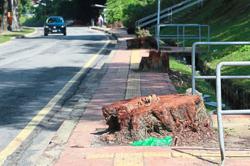 Road widening project to include 10 trees saved from the axe