THERE many secret freshwater angling spots in Pahang and one of them is about an hour’s drive from the Klang Valley.

After a break from fishing for two years, I rekindled my contact with an old friend Y.P. Chan or better known as ‘Ah Pan’ and farmer Wong Chun Keat in mukim Sertik near Bentong.

Both Ah Pan and ‘Seefu’ Wong are hardcore fresh and saltwater anglers who recently formed a cycling team and after taking a short rest from angling.

After an hour’s drive from Kuala Lumpur, I met both of them and had breakfast in Bentong before proceeding to their ‘secret’ fishing hole somewhere in the fringe of the Temerloh district.

The day was set out to hunt for ‘Cherry Snappers’, a variety from the Red Tilapia (tilapia mossambica) which is exported to countries like China and the middle east.

At any given time, the harvest yield is at one tonne per season and this became farmer Wong’s supplementary income apart from his lowland vegetable farm.

Wong is also one of the few farmers in Pahang who was given a certificate in Good Agricultural Practise by the Agriculture and Agro-based Industries Ministry and angling, of course, is his first love.

We were taken to a small pond and as soon as the line was cast, Ah Pan made his first strike and landed a few table-sized Red Tilapias.

Farmer Wong, on the other side of the pond, was casting his line for a prized catch - the ikan Haruan or Snake head (Channa Striatus).

The day clearly belonged to Wong as he landed a table-sized Soon Hock yee or Marbled Goby (Oxyeleotris marmorata) which we had for dinner on the same night.

Farmer Wong hosted dinner with his prized catch where everyone have had a good share of the tasty freshwater fish.

I left his farm with a satisfied look on my face and am looking forward to more daytrips to the man’s secret fishing hole. 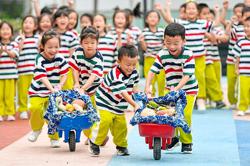