Vital for community to be proactive, says Khaled

PASIR GUDANG: The public should interact more with the police to ensure greater security presence in their community.

Pasir Gudang MP Datuk Seri Mohamed Khaled Nordin said residents should not depend entirely on the police on their safety.

He urged the community to be more proactive by cooperating with the police and play an active role in their neighbourhood night watch.

“Help the police to decrease the crime rate in your residential area by giving out useful information to them.

“Crime prevention is the best tool to deter such activities but the police need the cooperation from the public to do so,” he said at a community-policing program at Taman Air Biru here.

Khaled added that the Government have introduced new plans to enhance public order and security for its citizens.

He said that under the National Blue Ocean Strategy the police and the army are conducting joint patrols at residential and commercial areas for this purpose.

“This is the first time in our nation’s history that the police and the military are conduct joint patrol together.

“The Government have always prioritised the safety of the rakyat where security and stability is a key point to attract foreign companies to invest here,” Khaled said.

Khaled added that the Government had also installed short-circuit cameras in several hotspots in the Iskandar Malaysia area as crime prevention measures. 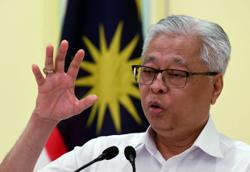