A CENTRAL sewerage system has been planned for Miri as part of the state government’s effort to turn it into a truly “green and healthy” city.

Deputy Chief Minister Tan Dr George Chan said the master plan study for the proposed RM400mil project would be carried out in the 10th Malaysia Plan.

He said when the project is implemented households no longer need to have individual sceptic tanks as housing estates would be connected to the central sewerage treatment plant.

“This project is some of the initiatives that can be categorised as green projects,” he said at the opening of the Green Technology Roadshow 2010 in Kuching yesterday.

A central sewerage system is presently being built in Kuching.

Dr Chan said the state’s other mega green project are hydro-electric dams, which are expected to generate a combined power capacity of 28,000 megawatts (MW).

Sarawak is planning to build five more hydro-electric dams over the next five years.

Dr Chan said hydropower, which is the state’s renewable source of energy, was the driver of the Sarawak Corridor of Renewable Energy (SCORE) promoted under a green technology policy.

SCORE covers an area of 70,709 sq km, with a population of 607,800 people. The major urban centres within the Corridor are Sibu, Bintulu, Mukah, Sarikei and Kapit. 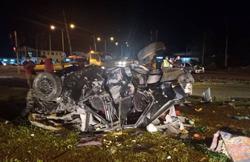 One killed, another seriously hurt in accident near KK airport