100 years of oil in Sarawak

SARAWAK Museum will hold the Grand Old Lady Centenary Celebration at the Petroleum Museum on Canada Hill in Miri on Aug 7.

Many fringe activities have also been lined up to enliven the celebration.

“We have to promote and understand our heritage before we build a love for it,’’ said Leh.

The theme for this year’s event is Miri, a Green City, Heritage and History.

Leh said that Sarawak Museum would host the event in partnership with the Ministry of Tourism Heritage, Sarawak Shell Bhd, Petronas Sarawak and Miri City Council.

Among the highlights will be the Centenary Race, popularly linked to The Amazing Race reality television show.

Leh said that each team in the race would have a maximum of four participants in a car and they would race to destination.

“Along the way, they will have to answer riddle-type historical questions for which they will be given marks. There will be five questions and 10 check points leading to the final destination.

Leh said that entry forms for the race could be obtained from the Petroleum Museum.

Each team will have to pay a RM50 participation fee.

Other events include a children’s colouring contest, an exhibition of old gramophones by Johnny Lucas and the 100th anniversary exhibition on oil discovery and exploration in Sarawak.

Leh said there would be special gifts for lucky visitors to the Petroleum Museum on the day.

The Museums Department had called for immediate repair works on the Petroleum Museum’s faulty air-conditioning system, he said.

“Repairs are already underway. We will also instal additional air-conditioners and the work is expected to be completed by month-end,” he added. 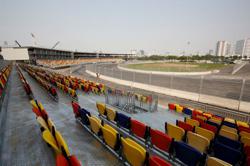 Portugal reconsiders if fans will be allowed at F1 race