Home for the elderly needs wheelchairs

KUANTAN: Nonagenarian Leong Marn Young is living her twilight years in good hands. After all, not many children will have the time and resources to take care of a “grand old lady” such as Leong.

To many, the best option is to place their aged parents at a nursing home, which could provide all the basic necessities and care. 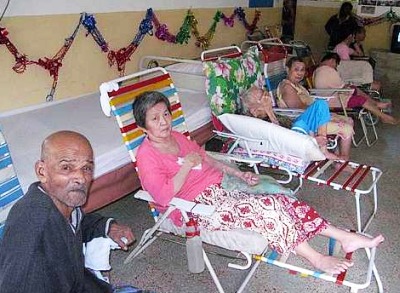 Caring for the elderly: Some of the senior citizens at the home.

Mega Melodies Nursing Home in Seri Kuantan near here was one of the many options available to the people. Set up in 1997, it had since become a home to many senior citizens and those with permanent physical inability.

Its supervisor James Perumal said Leong, 95, was the oldest among their residents and had stayed in the home since May 2002. He said her children and grandchildren would pay her a visit regularly.

“Despite her age, she can still talk softly and thank our staff for feeding her. The only thing that she dislike is people touching her,” he said in an interview.

Perumal said a fee of RM800 is charged monthly to care for Leong, which includes four meals a day.

He said Leong is well behaved and did not need a special diet. She also would not disturb others and rarely fell sick.

“We do send her for medical check-ups monthly just to be sure,” he said, adding that Leong was a very hard working and independent person when she was young.

He said the home is grateful to the Malaysian Crime Prevention Foundation Pahang chairman Datuk Johnny Ch’ng Ewe Gee who donated a foot exercise machine to the home recently.

The machine, he added, came in handy to enable two physically challenged residents to exercise their leg muscles.

Presently, he said the home was short of wheelchairs and hoped some kind samaritan would sponsor them. For more information on the home, the public can contact 09-567 1904.