The six-hour seminar was one of a series jointly held in Peninsular Malaysia by Plus Expressways Bhd, Malaysian Road Safety Department (JKJR) and Malaysian Highway Authority (LLM). 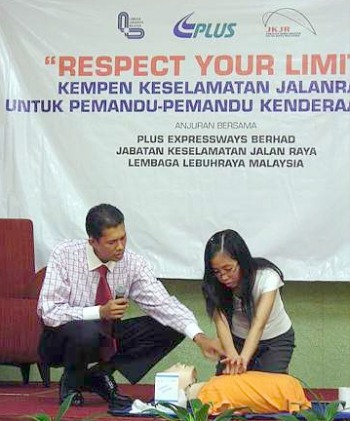 “Road accidents involving heavy vehicles can be avoided if drivers respect their’s and their vehicle’s limits,” said Plus general manager of operations Mohammad Fuad Khusairi, who officiated at the seminar.

“Drivers often overestimate their abilities to continue driving despite fatigue and sleep deprivation, which leads to them not paying attention on the roads.

He said that, until the end November, 1,036 accidents involving heavy vehicles were recorded, of which 203 involved buses

“While this number is lower than that in previous years, we believe we can lower the statistic via seminars like this,” added Mohammad Fuad.

The seminar had talks by speakers from Plus, JKJR and Malaysian Institute of Road Safety Research, and included a first aid demonstration.

Participant Marry Iswaran, 41, who works with a transportation, forwarding and shipping company, was the only woman at the event.

“I came because I wanted to train my drivers to be more reliable and effective.

“They drive huge trucks so it is all the more important for them to be careful,” she said.

Another participant, P’ng Pei Seng, 52, who works for a bus company, said he attended to find out what the authorities were doing to keep the roads safe.

“I learned a lot in regard to maintaining vehicles and not compromising on spare parts.

“I am happy that Plus has taken measures to ensure safety on its expressways,” said P’ng, who attended such a seminar for the first time.

“They are the ones who drive. Not the managers and administrators,” he said.

“The seminar is basic but a good start. I commend Plus, JKJR and LLM for kicking it off and hope more will be organised,” he said.