LAHAD DATU: A Sumatran rhino rescued five months ago in the Sabah’s east coast now has a more comfortable home following the efforts of various state authorities and NGOs.

“I am very pleased to see this new enclosure for this healthy male rhino which will now have access to a larger area,” said Sabah Wildlife Department director Laurentius Ambu.

Recently, Ambu inspected the RM200,000 enclosure at the Tabin Wildlife Reserve with representatives from Borneo Rhino Alliance (BORA) and WWF-Malaysia.

The rhino’s new enclosure is about the size of three and a half football fields. 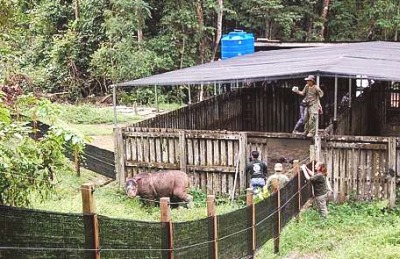 New home: The rhino comes out of his paddock (wooden structure) and inspects his new forest home which is surrounded by electric fencing to protect his area from wild elephants.

The rhino was coaxed gently with food into his new enclosure from his paddock last Thursday. He took a quick walk around the new enclosure which is protected with electric wires to prevent wild elephants from destroying the fence.

“The electric wire gave the rhino a slight jolt when he accidentally touched the wire.

“But now he has learnt not to touch the electric wire,” explained Wilflife Department chief field veterinarian Dr. Senthilvel Nathan who has been monitoring the rhino closely.

According to Ambu, following the Fourth Sumatran Rhino Conservation Workshop held in July last year the Minister of Tourism, Culture and Environment Datuk Masidi Manjun made a firm commitment of the state government to address the issue of the rapidly dwindling number of rh inos.

“We know all too well that the Sumatran Rhinoceros is on the brink of extinction.

“Due to the commitment made by the government, NGOs and the department are working in tandem to revive this amazing species,” said Ambu citing the rescued rhino as a prime example.