Eye on Malaysia from Malacca

IT WAS a night to remember for more than 10,000 people at the historic launch of the Eye On Malaysia at the Malacca rivermouth recently despite the threat of a storm.

It was a highly-charged affair with “oohs and aahs” when the 60m ferris wheel made its first spin at about 9.30pm following its launch by Malacca Governor Tun Mohd Khalil Yaakob.

Many stood in line to catch a ride provided free until 3am. Many walked away spellbound by viewing the city’s lights from 60m, with some vowing to return for a sunset spin.

Others stayed for a two-hour ceremony to watch a fireworks display and dazzling performances by local stars Ning Baizura and Mawi.

It would have three attractions, the first being the Eye On Malaysia. A 30m by 60m water screen would be ready by December and a 4D space exhibition by February next year, he said. 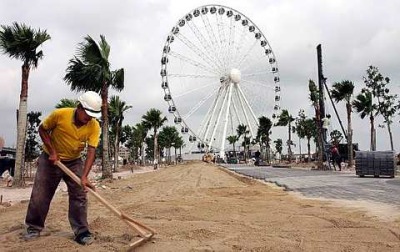 Paving the way: A worker preparing the pathway to the site two weeks before its launch on Nov 7.

He said the water screen, currently named the Strange World Screen and tipped to be the largest in the region, would display scenes of Malacca’s landmarks, and the space exhibition would give patrons a feel of outer space.

The park would include two world-class restaurants – the Eye Cafe and Eye Seafood Restaurant, Yong added.

“I believe, with the Eye On Malaysia, we will draw enough visitors to reach our target of 6.8 million tourists by year’s end,” he told reporters at a press conference after the launch.

He said the ferris wheel was expected to attract 3,000 visitors each weekend and 700,000 visitors a year, particular tourists from neighbouring countries.

He said the state would construct an access road to the Eye to prevent jams on roads leading to the site. 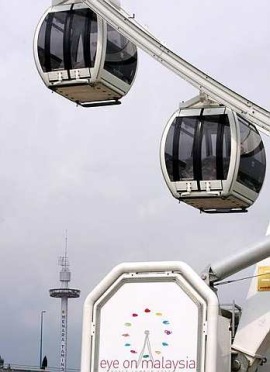 He said the state was considering a canopy walk suspension bridge to enable visitors to walk to the Eye from the other side of the river to ease traffic jams.

The bridge would be an attraction by itself, he added.