Match between Police and Kuala Lumpur not played

REFEREE George Wise and fourth match official Hanafi Mat Dom were assaulted while fans invaded the pitch after the second leg semi-finals of the Bardhan Cup football competition at the Petaling Jaya Stadium in Kelana Jaya on Saturday.

Selangor won the match 2-1 with the winner coming from an 89th minute penalty by D. Surendran. Selangor qualified for the final on 4-3 aggregate.

Immediately after Wise blew the final whistle, the Penang players, led by R. Ruthran, charged at the match official. Before Wise could get protection, the Penang players surrounded him and questioned his decisions. During the fracas Penang’s S. Puvanesvaran was seen kicking Wise. 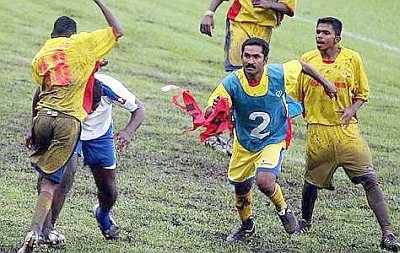 Venting his fury: A Penang player (in blue and white) fighting with Selangor players after the match.

The Selangor players, including the reserves, rushed on to the pitch to diffuse the situation but they, too, had to retaliate when attacked.

Several fans, including one armed with an umbrella, showed their anger by joining in the free-for-all which lasted almost three minutes.

The Penang players vented their anger on Hanafi, who was harassed by Penang officials throughout the match, on the way to the changing room.

Selangor, who were held to a 2-2 draw in the first leg in Penang, adapted well to the heavy pitch and were on the offensive to get a quick goal. In the 31st minute, Wise gave the marching orders to Penang’s P. Kamalanathan for rough play. 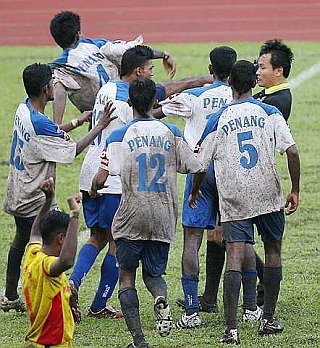 Flying kick: Penang’s S. Puvaneswarn (No. 4) landing a flying kick at Wise while his teammates join the attack.

After a scoreless first half, Selangor took the lead in the 55th minute when captain Surendran, returning after a one-match suspension, scored from a free kick.

However, Penang were on level terms in the 57th minute through Mohamed Shafiq Mustapha. Selangor were awarded a penalty in the 89th minute and Surendran made no mistake from the penalty spot.

Selangor manager P. Ravindran said it was unfortunate that the match had to end in a free-for-all.

“It was a close match and the tension was quite high. The Penang players should have accepted the result. Our players had to rush in to protect the referee,” said Ravindran.

Meanwhile, the second leg semi-final match between Police and Kuala Lumpur at the Selayang Municipal Council (MPS) stadium was not played. The match was originally scheduled to be played at the PKNS Sports Complex in Kelana Jaya but the Malaysian Indian Sports Council (MISC) changed the venue after a request by KL, who lost 1-6 to Police in the first leg. 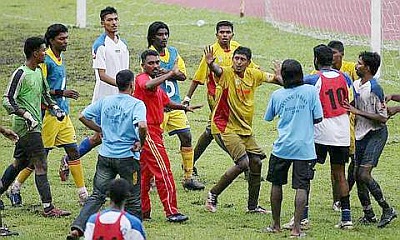 Free for all: Selangor skipper D.Surendran (in yellow, with arm outstretched towards camera) trying to push his players away from the Penang players (in blue and white) after the final whistle.

Police coach K. Thaiyanathan said they went to the stadium but it was closed.

“We contacted the competition chairman and he advised us to wait until 8.30pm. As far we are concerned, we should be awarded the match as KL failed to turn up. We will start preparations for the final,” said Thaiyanathan.

MISC secretary N. Saaran said the MISC council would be meeting soon to make a decision on the matter.