Cabbies not keen on side business

SOME of the taxi drivers in the city are unhappy with the government’s decision to allow them to do side business by selling packets drinks and phonecards to passengers.

According to them, the decision announced by the Entrepreneur and Cooperative Develop-ment Minister Datuk Noh Omar on Nov 17, was not reasonable and would not really help in supplementing their income. 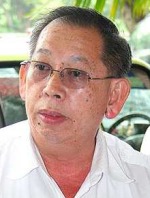 Hiew: The decision is not practicalbecause storing of food and drinks will takeup space in the taxi.

Instead a better measure would be to raise taxi fares and focus on taxi drivers’ safety, they said.

Persatuan Radio Teksi Selangor and Wilayah Persekutuan president Rickman Hiew said the decision was not practical because storing of the food and drinks in the taxi would take up a lot of space.

He added the side business would also attract petty thieves, who would be after the money collected from the sales.

“Moreover, how are we supposed to drive when we are selling drinks?,” said Hiew.

“Besides there is a Road Transport Depart-ment (JPJ) sticker in the taxis asking the passengers not to eat or drink while travelling,” he said in a press conference organised by Cheras MP Tan Kok Wai, at a Jalan Loke Yew Kuala Lumpur City Hall (DBKL) flats yesterday.

Hiew added that raising the taxi fare from RM2 to RM3 for the first kilometer would be a better solution, as the last fare increase by the government was almost 12 years ago.

“Of course, there were some fare increases over the years but it is very minimal. A RM1 increase will not make much difference to our customers because those who take cabs are a specific group of customers”. 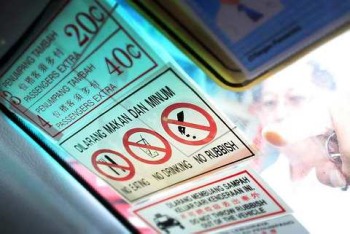 The rule: A sign that says no eating, drinking or littering in the taxi.

The association also suggested the distance is shortened from 150m to 100m for every 10 sen.

Taxi drivers’ safety and the need to have more natural gas pumps were the other concerns expressed at the press conference.

“Taxis should be fixed with a safety grille due to the rising crime rate. Having more gas pumps is a necessity as sometimes we spend about three hours to fill up gas. It is a waste of time,” said Hiew.

Tan said he would bring the matter up in the parliament.