FOR years, the residents from a few villages in Segambut have been putting up with flash floods each time it rained for more than 30 minutes.

The situation has now become worse with new up-scale development projects in the neighbouring areas.

Sometimes the water level is about 60cm high, flooding homes and damaging properties.

Due to the projects, the flood also brings in muddy water and dirt and this makes cleaning a chore. 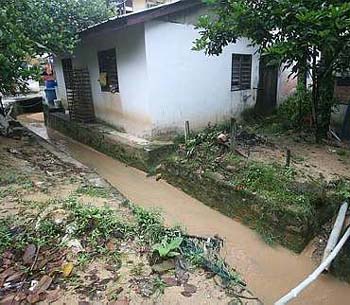 “We have been dealing with the flood problem for about 15 years and the condition has gone from bad to worse,’’ he said during a site visit to the area with Segambut MP Lim Lip Eng on Saturday.

This year alone, the area has experienced more than 10 major floods.

Imeran also said his car drowned in the floodwater several times with the last incident taking place about two weeks ago.

He added that numerous complaints had been made to the Kuala Lumpur City Hall (DBKL) over the years but that no action had been taken so far.

Meanwhile, another problem in the area is the bad roads brought about by construction lorries.

Jalan Segambut Dalam, which is the trunk road in Kg. Masjid Segambut Dalam, is used as an alternative route to access some of the construction sites at the end of the road, neighbouring Hartamas.

Resident Irwan Sabei, 32, said the roads were damaged by the heavy vehicles and complaints to the DBKL had not helped.

“We have also complained to the developer but they told us that the DBKL has not given permission to tar the road,” he said.

Besides all this, the area is also facing an increase in the number of illegal immigrants of many nationalities.

“Some are renting houses in this area while others have just settled here without permission on reserve land. There have been raids periodically but the immigrants keep coming back,” he said.

Lim said he had forwarded the complaints to the DBKL, especially matters pertaining to the flash floods several times and hoped action would be taken soon.

“I will also bring up these matters during the closed door meeting that the DBKL is having with all the Kuala Lumpur MPs on Nov 19,” he added.