Safe to ride on Kesas 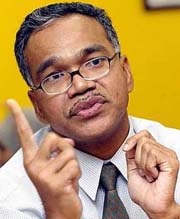 KESAS Sdn Bhd, the Shah Alam Expressway concessionaire, has given assurance to motorcyclists that it is safe to travel on the lanes designated for them.

In response to StarMetro’s story titled Daily Dice with Danger for Bikers on Oct 23, Kesas financial & corporate division deputy general manager Abdul Rashid Rahman said motorcyclists should not be encouraged to ride on the highways as it is very dangerous.

“Out of the 10 fatal accidents that occurred on the Shah Alam Expressway this year, eight involved motorcyclists travelling on the highway,” he said.

To prevent such accidents from happening, Kesas is working with the police to book motorcyclists riding on the highway in broad daylight.

“A total of 154 summonses have so far been issued to offenders during these joint operations,” Abdul Rashid said.

He pointed out that measures have been taken to ensure the safety of the motorcyclists along the 34.5km long highway that stretches from Sri Petaling in Kuala Lumpur to Pandamaran in Klang.

“Our 3.5m-wide motorcycle lane is well-lit. Streetlights are added if the lane is located away from the highway, but if it’s just next to the main road, then it will share the lights from the lamp-posts along the highway,” he said.

Kesas traffic safety manager Khairi Noordin added, “We have also trimmed the shrubs in between the motorcycle lane and the highway so that motorcyclists have a better view of the road ahead.”

Abdul Rashid refuted the claim by a motorist that there are a few places with 90° corners on the motorcycle lanes.

“The turnings on the motorcycle lanes are smooth,” he said.

He also clarified that the part where a concrete boulder was blocking the motorcycle lane has already been closed.

“We handed over the stretch of lane to the concessionaire of the Kemuning-Shah Alam Highway to facilitate their construction works.

“We diverted the traffic onto the main road before allowing motorcyclists to rejoin the motorcycle lane after the closed stretch,” he said. On to the designated lane: After the particular stretch of the Kesas motorcycle lane which wasclosed to facilitate the construction works of Kemuning-Shah Alam Highway, motorcyclists are divertedback to the motorcycle lane.

“As motorcyclists do not have to pay, some will zoom past the toll gate when it’s being lifted to allow a vehicle which has paid toll to drive through.

“Once the automated lane barrier censor detects something has passed by, it goes down and hits the windscreen of the vehicle. Kesas suffered losses when the vehicles claimed insurance compensation from us,” he said.

While the police is taking care of the safety on highways, Abdul Rashid pointed out that Kesas has a 24-hour patrolling team checking on the highway every half an hour.

“Should motorists encounter any problems, they can call our hotline at 03-5633 7188. They can also use the 46 emergency telephones located along the highway,” he said.