The sifu of industry captains

The No 1 men of many major corporations have no qualms addressing one man as “Sifu” — their qigong master Suolangyixi. Despite busy schedules, they and their family members will find time to attend the Tibetan Qigong (also called Suolangyixi Qigong) classes almost every day as they witness how their health has improved miraculously.

Media consultant Datuk Hoong Soon Kean, the former Nanyang Press group editor-in-chief, is hale and hearty after learning qigong from the master who hailed from China and perfected his skill in Tibet.

Hoong, a diabetic, had been injecting himself with insulin for the past 20 years. His big toe had even turned gangrenous. All these became history just two weeks after he started attending Suolangyixi’s class.

“I think sifu should be awarded the Nobel Prize. The prize in Physiology or Medicine was won by Frederick G. Banting and John J. R. Macleodin in 1923 for the discovery of insulin, but sifu has helped many diabetic patients do away with the daily ordeal of injecting insulin,” he said in an interview at the 11th floor of Wisma Mirama, Kuala Lumpur, where the classes are conducted. Hoong, 62, claims that besides improving his health, qigong has also helped him secure his wealth.

The exercise, he said, gave him clarity in thought and the benefits reaped were beyond expectation.

“One uneventful evening, I had a sudden premonition which led me to sell all my shares at a loss. Shockingly, the market collapsed that very week,” he recalled.

Hoong said the simplicity of qigong was another reason why he was attracted to the exercise. “It is very easy to learn, all you have to do is just relax, empty your mind and listen to the soothing Chinese music. After that, the qi will move you and do all the work for you.”

A sense of bliss descends upon the venue when students move their bodies with their eyes shut while executing a series of simple gestures and postures under Suolang’s guidance.

As it is the qi that does the work, the extent of body movements differ according to one’s health problems. 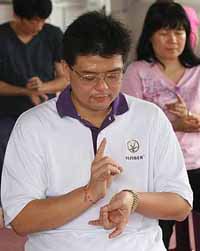 Suolang, a Shandongese, started the course in Malaysia in the middle of last year.

According to him, qigong has managed to heal about 150 out of 160 diabetics here, and thousands in other parts of the world.

He said the success rate was more than 70%. As for the rest who did not heal, he said it could be because the patients could not open up their hearts and did not cooperate fully.

Apart from diabetics, he also has students suffering from other chronic diseases such as leukaemia. Tan Kiat Leong, 54, who underwent stem cell transplant recently, is an example.

“For a long while after the surgery, I was so weak that my right hand could not even reach my left hand but I could do that only after one session here. On the third day, I could lift up my hands,” he said.

It was unimaginable for Tan who was told by the doctors in his home state, Sabah, that he had only two weeks to live, when he was first diagnosed with leukaemia in March last year.

“Initially, I had to take 21 tablets of chemotherapy medicine every day. Now I only need to take eight. My doctors are very impressed. I can practise five hours a day, it is not tiring at all, and I managed to gain 4kg in only five weeks,” he said. 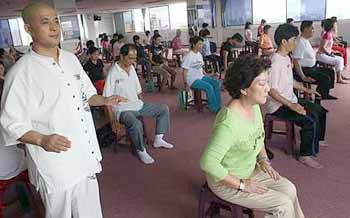 Cultivating the qi: Suolangyixi (left) in a class with his students at Wisma Mirama.

NV Multi Corp Bhd managing director Datuk David Kong is another prominent entrepreneur who can testify to the remarkable healing powers of qigong. Several sessions of qigong were all it took to solve his long-standing backache and insomnia.

“I was tempted to give it a go after I saw for myself how sifu’s qigong has helped my wife. She is so much healthier and prettier after taking up the exercise. I am truly grateful,” he said.

“I hope this qigong can be made well known, so that more people, especially the sick, can benefit from it,” he said.

Visiber Sdn Bhd executive chairman Datuk Patrick Tan said his blood sugar level returned to normal after only five days of practising qigong and he shed 10kg in just one month. “I’m in better shape now. It’s really a new life for me,” he said.

He said the blood sugar levels of his two brothers, both diabetics, were brought under control after several sessions of qigong while his Vietnamese worker’s alarming 17mmol/L blood sugar level was brought back to normal after two months of the exercises.

Impressed by the results and hoping to help more people, Beh urged the master to start a course in Sungai Petani, Kedah. Due to time constraints, the master has agreed instead to record his qigong moves on DVD.

Two weeks ago, Takana Seiya came all the way from Hokkaido, Japan, to look for the master to cure his diabetic problems.

“I learned about the master through my sister who is a friend of Hu Jing (Chinese actress who was married to tycoon Frank Choo recently). True enough, my blood sugar level dropped dramatically after only one session,” he said.

Suolang said qigong was based on science and logic, it was not at all religious or mysterious.

He has been practising qigong, Shaolin Wushu, Chinese Medicine, Feng Shui and Waidangong (a type of qigong) for more than 30 years and later followed his masters to learn Mizong (Tibetan) qigong.

What he imparts is basically the fine-tuned and simplified essence of the amalgamation.

He said qigong could help individuals tap into the earth’s magnetic field to charge their own smaller magnetic fields, which would then enable smooth flow of energy, discharge body toxin, clear blockage in the system and finally improve wellbeing.

“The qi will first boost the dexotification functions of the liver and kidney as the first step to tackle various health problems.

“Therefore, students will find themselves visiting the washroom more often in the first weeks,” he said, adding that the method has been proven effective in thousands of cases, especially diabetes and erectile dysfunction, while others regain youth, good shape and rosy complexion.

Suolang will first teach his students relaxation exercises with the accompaniment of music. Then he will proceed to teach students how to cultivate and mobilise their qi. Sometimes, he will aid his students to find the qi within them to kick-start their sessions.

He believes in using simple but effective methods. “There are as many as 30,000 gestures to alleviate urination problems and how do we expect an individual to remember all those? I select the most essential and effective ones for students,” he said.

“Once the qi is cultivated, it is very easy as it will move you, that’s why I call it ‘fully automated energy yoga’,” he added.

The classes are conducted at the 11th floor, Wisma Mirama, Jalan Wisma Putra (near Dewan Bahasa dan Pustaka building). For details, call Cherlyn at 016-2833 823 or log on to www.slqigong.com.