THE Works Ministry will widen the slip road, create a U-turn and build more sound barriers as part of the measures to resolve the traffic nightmare along Jalan Ulu Kelang, Kuala Lumpur.

Works Minister Datuk Mohd Zin Mohamed announced this when he visited the site to explain the technical aspects to the residents in front of the Good Shepherd Welfare Centre (PKGS) in Jalan Ulu Kelang.

“This is the last area of the traffic’s main exit-entry point. As this road connects to the MRR2, there is a need to give the residents who have voiced their concerns about traffic dispersion a comprehensive technical explanation,’’ Zin said. 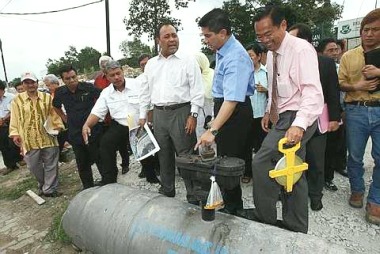 In the way: Mohd Zin (front row, third from right) ordering the water pipes to be movedin order to widen the road while Azmin (second from right) looks on.

“One of the most important thing is the entry-exit point from the residential areas.

“The slip road, which will be in compliance with international standards, will be extended to two lanes, from 3.35m to 5.49m to accommodate the volume of road users,” he said.

“The traffic volume is 120,000 vehicles at the MRR2 during peak hours, which is very high,” Zin said.

“I have asked the Malaysian Highway Authority (MHA) to study the situation and create a U-turn specially for cars.

“This is for the benefit of residents using the MRR2 and DUKE highway. The third issue is to put up more sound barriers,” he said.

“My concern is that if the slip road is too narrow, at only 3.35m, it will not be able to accommodate a high volume of road users,” he said.

Another issue is that the developers are adamant about leaving the water pipes located at the slip road. In case of an accident, the water pipe could burst.

Following the site visit, the ministry has ordered the water pipes to be moved.

The PKGS, meanwhile, said in a press statement that there was a traffic jam every morning as the road from the roundabout joined Jalan Ulu Kelang.

“The PKGS residents, who are teenagers and nuns, have been exposed to great danger, risk and daily inconvenience since the road work started in 2006,” it said.

“The residents of AU, Taman Hillview and Taman Sri Ukay are still not aware of the problems that they will face with the construction of the flyover and the slip road which would result in massive traffic jams in front of the PKGS daily,” it said.