The annual Nine Emperor Gods festival at the Kew Ong Yah Temple in Malacca came to an extraordinary end with more than 150 devotees walking on fire as a show of their faith.

The fire-walking ceremony was conducted at 8.15pm last Tuesday where devotees walked barefoot over a 3m by 5m path made of burning coal in the temple’s compound. 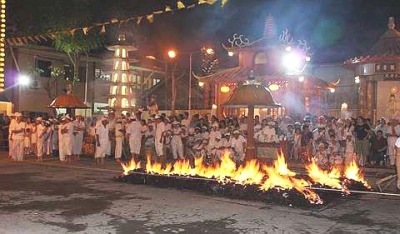 They were among the thousands of Taoist devotees here who had observed nine days of strict vegetarian diet to purify themselves in conjunction with the religious festival.

A firewalker, who wished to be known only as Ah Wah, 45, said he had been performing the ritual at the temple in Bachang for the last 15 years. “It is necessary to be involved throughout the nine days.

“One has to pray continously when walking over the hot coals so the gods will protect you from any pain or burns,” he said after making his walk.

Ah Wah said he only felt his feet getting warmer during the ceremony and it was a belief that those who were pure in heart would not get burnt. 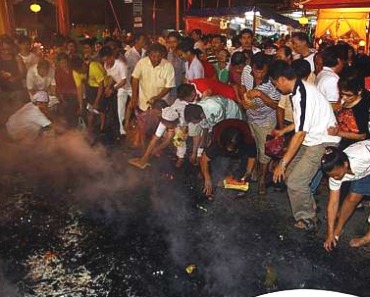 Later, many devotees took home pieces of the doused coals believing that it would bring luck and prosperity.

The nine-day ceremony ended at midnight when the devotees bade farewell to the Nine Emperor Gods by sending them off in a ritual at the nearby Malacca River.