For a period of nine days, people from all walks of life observe a vegetarian diet and gather at the temple to pray and make offerings. 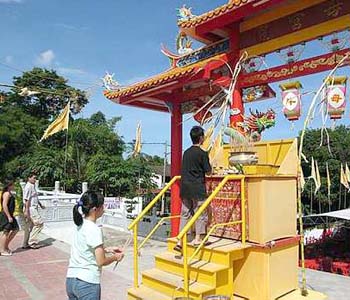 A devotee praying at the Tow Moo Keong temple in Jalan Haji Junid, Kuantan, during the Nine Emperor Gods Festival.

It is believed the nine deities honoured during this festival dwell in the heavens under the reign of Thien Hou or Queen of Heaven.

A special ceremony was held near DeRhu Resort to invite the Jieu Hwang Yeh from the seas on the eve of the nine-day festival.

They will be sent back to the sea on the last day. 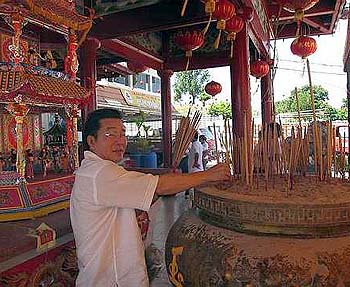 Throughout the festival, Chinese operas are staged twice daily to entertain the crowd.

Religious rituals are held daily for devotees to offer prayers to the deities in return for their blessings.

Among the highlights is the symbolic “crossing of the bridge” to seek good fortune on the seventh day of the festival.

Other activities include lion dances, 24-seasons drum performances, daily chants and offering of advice to devotees by the temple’s medium.

The temple, which will celebrate its 42nd anniversary this year, is the main organiser of the festival.

A variety of religious items including ornaments, amulets and educational videos were on sale at the premises. 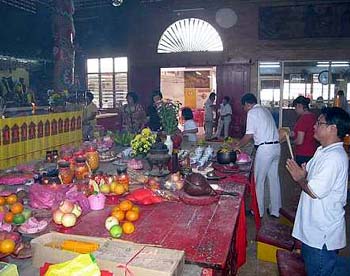 Traders dealing in ware such as clothing, food and drinks recorded brisk business while devotees brought along family members to join the celebrations.

Vegetarian food was on sale with dozens of volunteers helping to prepare the dishes or folding incense paper for mass burning.

Semambu assemblyman Pang Tsu Ming was among those who dropped by to offer their prayers. 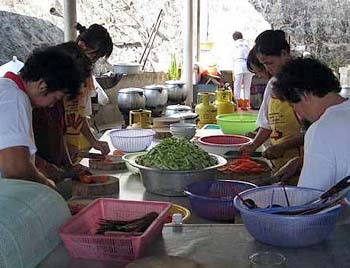 Pang said he found time to come in the afternoon of the fourth day.

“I was busy with party matters and attending to problems in my constituency. I prefer to come in the evening as there is a bigger crowd and activities abound,” he said, adding that the wet weather was a hindrance as it usually rained heavily during this period.

Pang urged the younger generation to learn and understand Chinese culture and religion to preserve it in the years to come.

“All religions teach us to do good deeds and stay away from bad things or cause harm to others,” he said.

Due to the larger crowd at night, Rela personnel were stationed to ensure safety and smooth flow of traffic.