THE modern minaret-like structures on top of a complex across a discreet corner of the Putrajaya Lake have attracted the attention of many visitors to the nation’s administrative capital.

No, the complex is not a mosque or a museum as is generally assumed or perceived by many people.

It is the Pullman Putrajaya Lakeside Hotel. 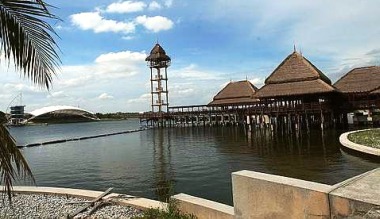 Good view: A view of the lake from the hotel.

The hotel’s soft opening is scheduled to coincide with the 5th leg of the International Water Ski Federation (IWSF) Waterski and Wakeboard World Cup series from Nov 7 to 9 at the neighbouring Water Sports Complex in Precinct 6.

Finishing touches are still being done on the Pullman Putrajaya Lakeside but general manager Patrick Sibourg is confident that it will be ready to open on time.

Sibourg explained the unique concept behind the hotel to StarMetro during a recent briefing and tour of the complex.

According to Sibourg, Pullman Hotels and Resorts took over the Putrajaya lakeside hotel management in 1997. 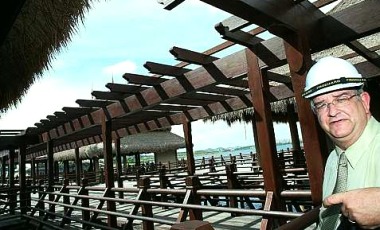 Work in progress: Sibourg is confident the hotel will open inNovember.

“Our rooms are designed around the multi-cultural ethnic influences. For a touch of Borneo, the lakefront Rafflesia rooms are fitted with timber pillars and hand-woven wall hangings,” Sibourg said.

The Jasmine rooms, meanwhile, radiate with the charms of mystical India. In one finished room, there were brass lanterns and small recesses in the walls and the frames inlaid with mosaic, reminiscent of Moghul design.

The Bunga Tanjung rooms have a Malay theme with traditional fittings like wood carvings.

According to Sibourg, the, hotel will offer 283 rooms, suites and apartments with the added convenience of 21 meeting rooms. 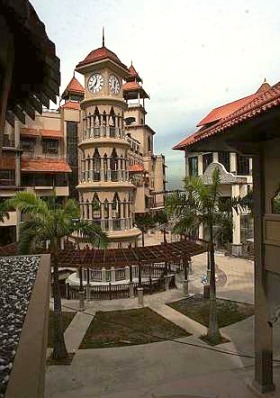 Impressive: The centre of the four wings of the Pullman PutrajayaLakeside features a clock tower.

Sibourg is especially proud of the hotel’s 250-seat open air amphitheatre located on the lakefront.

“Not many hotels can offer such a facility,” he said.

Sibourg also pointed out the other modern facilities like WiFi and LCD TV sets that the hotel provides for guests.

Extending out to the lake is The Stilts, promoting al fresco dining, and the Bar On-The-Lake, serving, among others, Asian and Mediterranean cuisines.

The other fancy and delightful food outlets are the B’s, China Bar & Lounge, The Deli and Bar On Third.