SOME 30 people, mostly from Orang Ulu tribes in Belaga, took part in the second Belaga Rainforest Trail Challenge in the jungles of Sarawak recently.

The event was organised by the Belaga District Office with Sarawak Tourism Board as its partner. Great looking: Liwan posing with the winners and other participants of the Miss Rainforest pageant.

Held in conjunction with the event was the inaugural Miss Rainforest beauty pageant.

The challenge began with participants warming up at Belaga bazaar by doing exercises and the poco poco dance with event officials.

They were then transported by longboat to the starting line at Giam Pasang Rapids, a 30€“minute ride from Belaga.

At a length of 1.5km, Giam Pasang is the longest and most treacherous rapid in Belaga district. The whole event took participants through a hilly jungle route.

The men’s category was won by Nawan Tabai who clocked 1 hour 28 mins followed by Madang Mali and Balan Chan. All three were from the Sihan tribe.

In the women’s category, Billing Naga, from the Sihan tribe, won at a time of 2 hours 19 mins followed by Deng Alai Chan and Hendok Sogo. 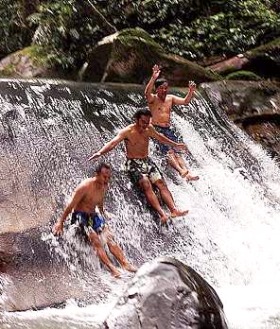 Members of the Sihan tribe, the smallest of the Orang Ulu community in Belaga with a population of less than 300, and are expert jungle trekkers.

It is no surprise then that the top three positions in the challenge last year was also won by members of the Sihan tribe.

After the race, members of the foreign and local media covering the event were taken to sites like the Tepin and Kejavo waterfalls and the Kejaman Lasah and Kejaman Neh longhouses.

The Kejaman are members of another tribe in the Orang Ulu community.

At the Kejaman Lasah longhouse, members of the media were briefed on the salong or traditional coffin used for the tribe’s headman known as maren. 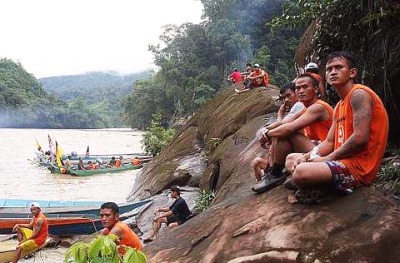 The coffins are placed on top of burial poles made of belian wood and located near the longhouse.

Continuing the festivities, the Miss Rainforest pageant was held at the Belaga community hall that night where contestant Bibiana Bulan was crowned winner.

The first runner-up was Facilliana Kampung and the second runner-up Winnie Mering.

To wrap up the event, Belaga assemblyman Liwan Lagang presented prizes to the winners.