DESPITE the slow economy, Muslims celebrating Hari Raya are not deprived of choice as an assortment of clothes, headgear and footwear can be found at many shopping areas in Seberang Prai.

Since the beginning of Ramadan on Sept 1, makeshift stalls selling these items have mushroomed along Jalan Pasar in Bukit Mertajam.

Budget watchers will have a field day here as baju kurung and Baju Melayu are reasonably priced to suit the pockets of the middle-income group. Popular footwear:Mohd Rizal(right)showing a pari of Aladdin sandals at his stall.With him is his assistant Mohd Ismail Rosli. 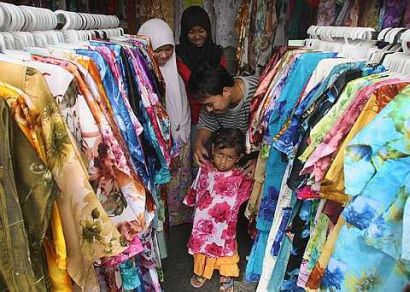 “Among my fast-selling outfits this year is the Baju Kurung Angkasawan, which uses floral material embossed with shiny confetti-like ornaments.

“Other favourites include the bead-studded Baju Kurung Labucci and the loose cut Baju Kurung Pahang,” he said.

Another operator Mohd Muslim Nawawi, 18, said vertical-striped Baju Melayu is in fashion this year, adding that “plain coloured Baju Melayu, sewn using Thai silk and satin materials, is still in demand as it often gives the wearer a distinctive look.”

Songkok seller Shaari Ariffin, 61, said he decided to retain his prices this year for fear of losing customers despite having to pay an additional 10% to source the items.

At Mytex Textiles in The Summit Plaza Bukit Mertajam, shop assistant Teoh Hoe Chiun, 27, said about 2,000 pairs of baju kurung and 5,000 pairs of Baju Melayu were ordered this Hari Raya.

Scarf Centre owner Halimah Ismail, 45, said she had sourced for more than 1,000 headscarves from Penang, Kuala Lumpur and Kelantan.

“Our ready-to-wear sequin-studded Tudung Arrini from Indonesia is selling like hotcakes this year.

“Georgette and chiffon selendang are also a favourite among youngsters, while the adults and children’s jubah are fast gaining popularity,” she said, adding that those who made family purchases were given up to 30% discounts.