The bane of Ulu Yam

ULU YAM is well-known for its crystal clear rivers and the scenic Batu Dam lake, but fewer people are visiting the place now than five years ago.

The once delightful resort destination has become a notorious area with a high crime rate, mostly involving car break-ins and robberies.

The place is also dark at night as there are few streetlights. Visitors are also put off by the parking fee being imposed.

Even the petty traders at the recreation areas have stopped operating their food and drink stalls.

Ulu Yam used to to be a haven for anglers who spent the nights fishing at the Batu Dam lake. Deserted: Only a few vehicles can be seen parked here at the Ulu Yam recreation area despite it being a weekend.

Today, not many anglers are staying through the night for fear of being robbed.

The Ulu Yam recreation area, which has three major stops, two managed by the Selayang Municipal Council (MPS), used to be a courting spot for young lovebirds. But not anymore. And the reason is the fear of being mugged by robbers.

According to Zurmiana Samsulbhari, 48, who stays in Rasa and has been selling food and drinks in the area for the last 11 years, she used to make about RM500 on weekends and about RM200 on weekdays, but her business had declined drastically.

“Now, there are very few visitors to the place.

“My stall used to be crowded with people eating, drinking and chatting. But now, it is all quiet,” she said.

Zurmiana blames the crime rate for the situation, especially the many car break-in at the township.

“Visitors are worried about the safety of their vehicles as car thefts happen very often. Recently, a vehicle parked next to my shop was broken into,” she said. 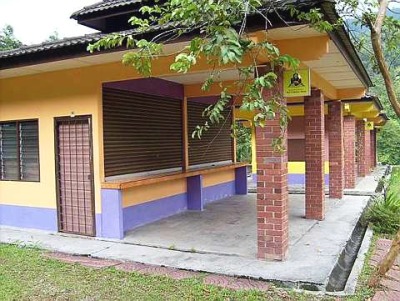 Not open for business: This closed shoplot shows how dead the place is on a weekday.

“The notorious image of the township as a crime-prone area is driving away many visitors. The high cost of petrol is another major reason why they are not coming,” Zurmiana said.

She pointed out that the situation was made worse by the lack of proper streetlights in the recreation areas.

Zurmiana said she now returned home at 7pm as she was afraid of being mugged or robbed.

Burger seller Khairil Anwar Erwin, 15, and his elder sister Erna Erawani Erwin, 16, both students at the SMK Syed Mashor in Batang Kali, were seen doing their school homework at their stall because there were not many customers.

Khairil said he used to make RM200 on weekends selling burgers and drinks but could only manage to make about RM60 now.

According to Erna, the high parking fee of RM4 is also discouraging people from visiting the area.

She said the MPS should install streetlights in the area.

Rosh Hushin, 36, an inspection crew member in Hong Leong Yamaha, takes his family members for a swim in the river once a month.

He told StarMetro that they usually arrive at about 10am and leave before 2pm.

“The water is crystal clear and my two sons Mohd Shukri Rosh, five, and Mohd Zamri Rosh, three, look forward to swimming in the river.

“The MPS should not impose parking fees. Also, I do not see any food and drink operators doing business at the designated shoplots,’’ he said. 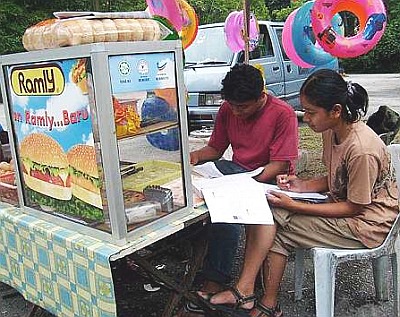 No customers: Khairil Anwar Erwin (left) and his sister Erna ErwaniErwin revising their schoolwork at their burger stall.

Norliza Yahya, who works at Tesco Setia Alam, said she did not dare to camp overnight at the place as it was dark.

“I was shocked that the parking fee is RM4. It is too expensive. It should be only RM2,” she said.

“There should be a surau at each of the rest area and the public toilets need to be maintained to ensure visitors would come again,’’ she said.

Avid angler Mohd Shazni Roslee, 20, said this was fourth time he visited the area to fish for ikan toman at Batu Dam.

The International Islamic University of Malaysia (IIUM) student said he returned home before sunset as it was very dark at night.

“If someone gets hurt, it will be difficult to call for help as there is no telephone service and motorists will be scared to stop,’’ Shazni said.

According to Syamsul Hidayat Mohd, the personal assistant of Batu Caves assemblyman Amirudin Shari, the police used to set up roadblocks to check on suspicious characters in the area five years ago but they had stopped doing so.

“Then, there were many visitors coming to Ulu Yam with their families. I urge to police to start the regular checking again to deter the high crime rate in the area,” he said.

On actions to be taken, Rahim said he would increase the police patrol of the area.

“We will also distribute flyers to people who go to Ulu Yam to inform them of car and motorcycle thefts,” he said.

“At the same time, we will also try to ensure that more frequent road blocks are carried out in Ulu Yam to deter crime,” Rahim added.