PAHANG Tourism Action Council organised the Tasik Bera-Tasik Cini expedition in the form of a three-in-one tourism package this year.

The package comprised of a canoeing challenge, a four-wheel-drive vehicle (4WD) challenge and the Earth Run from Cini town to Tasik Cini. 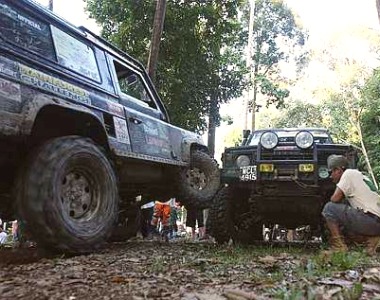 The Earth Run was held on the second day with 200 runners.

The canoeing event was challenging for the participants who rowed 19km from Tasik Bera to Tasik Cini.

The journey was along the scenic Tasik Bera which connects with Sungai Pahang and Kuala Sungai Cini before reaching Tasik Cini Resort.

The participants were mainly novices and first timers.

Some could not complete the journey and joined the participants of the 4WD challenge. 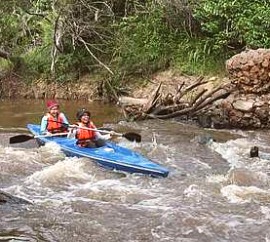 The first stop for the canoeists was an orang asli settlement in Tasik Bera, 5km from the starting point.

They continued to Sungai Bera, had lunch on the canoes, and proceeded along Sungai Pahang to Kampung Batu Bor in Bera district.

They camped on the sandy Sungai Pahang bank in the village, set up a barbecue dinner and shared tales and jokes with the villagers.

The organiser presented goodies to 20 senior citizens and single mothers from the village as a token of appreciation for allowing them to stay the night. 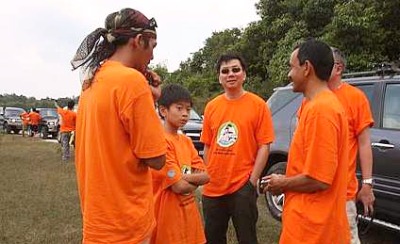 Getting set: 4WD drivers having a discussion before proceeding.

A heavy downpour in the night did not dampen their spirits although they had to sleep in tents on soggy ground.

In the morning, the canoeists took off for Kampung Chenor, 10km from Kampung Batu Bor, where they had breakfast.

The hot weather slowed them down and they took a detour to Kampung Lubuk Paku in Maran district, instead of Kampung Kuala Cini, for lunch.

Upon reaching Sungai Cini, some participants gave up due to leaks in their canoes or for suffering from exhaustion. 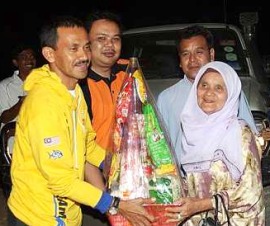 Council general manager Idros Yahya said, according to history, Sungai Bera, Sungai Pahang and Sungai Cini were used by the Malay warrior Hang Tuah to escape from Pahang to Malacca during his mission to kidnap Tun Teja (daughter of the then Pah ang Sultan) for marriage to Sultan Mahmud Syah of Malacca.

During that time, he said the rivers were deep enough to sail a tongkang, but they had become shallow due to siltation and development.

The 4WD challenge participants, mostly Singaporeans, had a easier time on several off-road laterite stretches in Bera and Maran districts.

In Cini, the 12km Earth Run attracted over 200 students.

Telematches were held in Tasik Cini for visitors while they awaited the arrival of the canoeists and 4WD challenge participants.