The largest low-cost carrier in Asia, AirAsia celebrated its inaugural flight from Kuala Lumpur to Makassar (Ujung Pandang) in a warm welcoming ceremony held at the Hasanuddin International Airport recently.

Hasanuddin International Airport is Makassar’s main gateway and it connects to other international routes which AirAsia flies to via Kuala Lumpur. 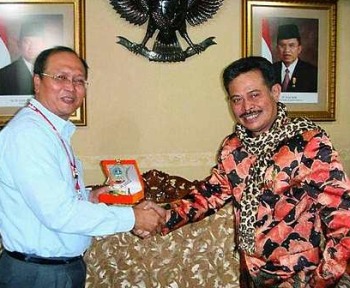 It also serves other domestic points in that region such as Bajarmasin, Kendari, Palu, Mana-do, Gorantalo, Ambon and Jayapura.

Guests on Flight AK1026 from Kuala Lumpur were welcomed with a traditional cultural dance before being garlanded by the VIPs.

Guests from Makassar who were travelling to Kuala Lumpur received goodie bags courtesy of Tourism Malaysia.

AirAsia group chief executive officer Datuk Seri Tony Fernandes said: “AirAsia’s low fares has enabled this new route to escalate in terms of the growth of passenger traffic between both countries and stimulate the local economies and tourism. This is evident as our first flight today recorded over 77% of load factor and this is a good indication of the strong growth for this sector.

“We hope that with this new air connectivity, the people of Makassar will have access to more low-cost alternatives to international routes and additional destinations from Kuala Lumpur. One for the album: A group photo of AirAsia’s management, captains with the Governor of South Sulawesi andhis entourage.

“Many Malaysian Malays are of Bugis descent with roots in South Sulawesi, hence the striking resemblance in terms of food and culture. Perhaps our revolutionary low fares will also initiate them to renew family ties and visit each other more frequently.”

Governor Dr Syahrul said: “We are pleased that AirAsia has become the first international airline to service this route, opening up our market to the world once again.

“Indeed this service has been long awaited by the people of Makassar and certainly will increase the integration between Makassar and Kuala Lumpur, enhance the trade and tourism industry of both countries in addition to further drive passenger traffic between the two cities.”