With free admission and ample parking, the audience can look forward to different sub-genres of jazz such as neo jazz, folk jazz, modern, ethnic and blues performed by seven artistes, including veterans and the new. 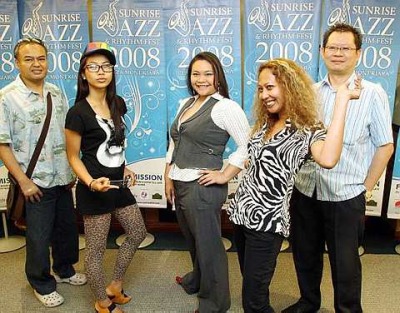 Jazz talents: (from left) Farid Ali aka Mr Gambus, Hunny Madu, Palencia, Karen and Albert Yap ofBassGroove 100 are all set to entertain during the Sunrise Jazz and Rhythm Fest 2008.

She has promised to present jazz in a way to appeal to the young audience.

“Expect some covers. It won't be traditional,” said the 23-year-old.

This will be the fourth time Farid Ali aka “Mr Gambus” will perform at the festival. He is known for incorporating jazz and Malaysian elements such as joget, dangdut and zapin.

“I'll be performing music mostly from my second album, which is a fusion of traditional music and jazz and there will be a classical Indian flutist to perform alongside,” he said.

Palencia and Karen gave a preview of their performance at the press conference with the former singing Call Waiting, which initially started out as a ring tone before evolving into a song and Karen sang a song which reminds her of the good old days in Malacca.

According to Sunrise Berhad branding and corporate communications general manager Joachim Ng, there will be 2,000 seats in the Plaza Mont Kiara courtyard and ample space provided for those who prefer to stand while grooving to the music.

“You can dine at the alfresco restaurants here while enjoying the music,” he suggested.

The Sunrise Jazz and Rhythm Fest 2008 is co-sponsored by Carlsberg and supported by Digi, Plaza Mont Kiara and Capital Fm.