Lee was the unanimous choice of the selection panel, headed by Selangor State Sports Council (MSNS) deputy chairman Amirudin Shari, for his impressive outing in local and international competition. 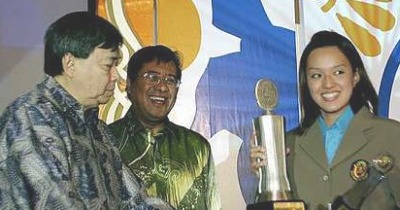 Moment of joy: Khoo (right) receiving her award from Sultan Sharafuddin (left) while Khalid looks on.

The 20-year-old Lee, a student of Bukit Jalil Sports School (BJSS), won gold medals in the SEA Games in Korat last year and the Asian Track and Field (ATF) championships in Lebanon.

Lee equalled the national record of 2.24m at the ATF meet.

Khoo was named as the Sportswoman for her record-shattering performance in the Korat SEA Games .

She won two individual gold medals – in the 400m and 800m freestyle events. She also erased both the SEA Games and national records in the 800m.

Her effort in the SEA Games also erased the longest national swimming record in the country of 8:47.98 belonging to the sensational Nurul Huda Abdullah. 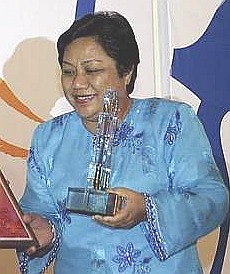 Khoo’s gold medal winning time in the SEA Games also earned her a place in the Malaysian contingent for the Olympics. She met the qualifying mark of 8:54.04.

Lee, who is training in Finland ahead of the Beijing Olympics, was not present to receive the award . Khoo received the prestigious award from Selangor Sultan Sharafuddin Idris Shah.

Khoo said she was happy to be the winner as the other candidates – Shalin Zulkifli, Uracca Leow and Nur Atiqah Abdul Razak – also had impressive results.

“The Sultan congratulated me for doing well and advised me to train harder for the Olympics,'' said Khoo.

They each received a RM3,000 scholarship to pursue their studies.

The Selangor Tennis Association (STA) president Datuk Abdul Malik Mohamed Salleh was presented with the Special award for his services as a player and administrator.

The Selangor Education Department and F&N Coca-Cola Malaysia were also honoured with the Appreciation Award for their support to MSNS programmes.