PENANGITES are resorting to cost-cutting measures like switching on their fans instead of air-conditioners in view of the new electricity tariff.

Many have stopped leaving electrical devices like ceiling fans and lights on as is usually the case.

Cheon Wun, 66, who lives with her married son and two young grandchildren said the electricity bill for their three-room flat in Bukit Jambul was about RM100 every month before the hike.

“The price of everything seems to be going up. First it was the petrol price and now the electricity. What’s next?” she asked. Cheon said from now on, she would have to ensure that the air-conditioner was on only for a couple of hours a night just to keep the room cool.

She had even stopped her grandchildren from opening the refrigerator too many times as the process, she said, would use up more energy.

A family of six staying at Bukit Gambir said their monthly electricity bill was about RM300.

But from this month, the bill is expected to increase drastically. 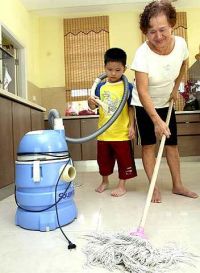 Chew and her grandson opting for the mop instead of vacuum cleaner.

Soo Kee Cheng, 23, said the high electricity bill was mainly due to the use of air-conditioners, electric irons, electric kettles and television sets.

“We have to turn on the air-conditioner during the day because of the hot weather and that’s the time when the children like to watch the television,’’ she said.

Another way to save electricity was putting up curtains to keep the heat out, she added.

She said the children had been told to be selective when watching television.

Soo’s mother, Chiew Gaik Tee, 60, said she had started cleaning up the house with mops instead of using the vacuum cleaner.

“I am also training my grandchildren to be more energy-efficient and limit their time in front of the TV,” Chiew said.

Irene Lee, 42, who is staying in Green Lane said she would only use the washing machine when necessary.

“I used to wash clothes every day but now I will only wash when there is a full load,’’ he said.

And, she added that she would make sure her sons turn off their computers and lights after they had finished their work.

“We will leave the windows open when we are at home so the house will not be warm. That will save us a lot on the electricity bill,” she added.

For example, if a household consumes 600 kWh per month, its electricity bill will total RM189.