CERTINA watches are making their way into the Malaysian market after a 12-year break with a new image and impact.

In 2005, Certina made a move into the world of Formula 1 racing as official partner of the Sauber Petronas team.

It strengthened its Formula 1 ties with the signing of Robert Kubica as the new ambassador as well as the launching of new product lines. 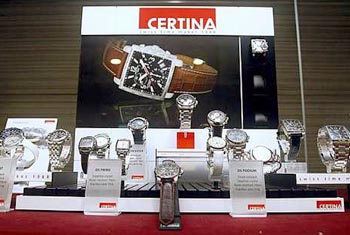 “The value of watches imported to Malaysia has changed over the years.

“This type of trend can be found in developing countries,” he added.

“The watch has a new identity and look unlike conventional Swiss watches,” said Halter.

“What has not changed is our will to follow our principle in providing quality, affordable and the best watches.

Certina also launched the DS Royal that exudes the retro reputation and spirit with a modern style.

Certina dates back to 1888, when brothers Adolf and Alfred Kurth opened a high-quality watch movement and supplies business in Granges, Switzerland.

Their activities expanded within a short time later by including full watch manufacturing.

And from 1906 their production bore the Grana signature (for Granacus, Latin for Granges). In 1938, the company marked its success from a family operation to a company employing some 250 workers.

In honour of celebration, the name was re-christened to Certina, which derives from the Latin Certus for “sure, certain”, paving the company towards a broader, more international market.

Suspect your phone's being monitored? Proceed with caution

Proclamation of emergency could have negative impact on economy, cautions Amanah