Rodents on the increase in KL and PJ

IT SEEMS as if rats in the Klang Valley are taking advantage of this Year of the Rat. They can roam, ramble and rasp however they like, especially at the wet markets and eating places.

The rat menace is almost certainly on the rise in the more urban areas of the Klang Valley, especially in Kuala Lumpur and Petaling Jaya and their surrounding areas.

The rats are social animals with an average life span of two and a half years. They are nocturnal as well as good climbers, jumpers, and swimmers.

Rats can spread diseases like Typhus, viral and bacterial infection to humans. 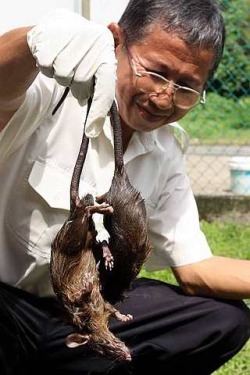 Not squeamish: DBKL officer Manaf Abdul Aziz with some of the ratscaught at Chow Kit in Kuala Lumpur.

There are several ways rats can be traced from the smell of their urine or their nest, bite marks, holes found on the ground, road side or near river banks and from the trail of crap.

Many urban folks would certainly have had seen rats, both big and small ones, running around at the back lanes of the commercial areas, especially where restaurants are located.

For some people, the problem with rats is almost a daily event at their homes, at the local eatery and the wet markets.

The bigger rats found in sewers and drains are usually the Rattus norvegicus or the Norway rat. The ones found in the homes are known as Rattus rattus. The cute tiny mouse is known as the Mus musculus.

According to Kuala Lumpur City Hall (DBKL) health director Dr Zainol Ariffin Pawanchee, most rats are found in places with a lot of food.

“Places with food encourage the breeding of the rats. Rats are big because they are well fed,” Zainol said.

Zainol said his department had been monitoring the situation all the while through control trapping.

He said the most important factor was the number of rat flea collected from combing each rat to establish the Rat-flea Index.

The number of rat flea collected from the rats and the total number of rats examined will provide the data for the Rat-flea Index. Ideal spot for rats: Wet waste is strewn all over this hawker site in SS2 in Petaling Jaya.

“The Rat-flea index should not be more than 1. If the number is greater, then it represents a potentially dangerous situation with respect to increased plague risk for humans,” he said.

“So far in KL, we are fortunate that the situation has not been as such because we do control the population,” he said.

“What we need to do is waste disposal control. For example, at a restaurant they can put grease traps and dispose waste to farmland,” Zainol said.

“However, on our part we try to use a different approach with our pilot project in Kampung Baru, where local residents are rewarded for each rat caught,” he said.

Zainol said the programme was successful as over 2,000 rats were caught.

“Our second project was in Wangsa Maju, where we managed to catch over 150 rats with the help of the local community,” he said. 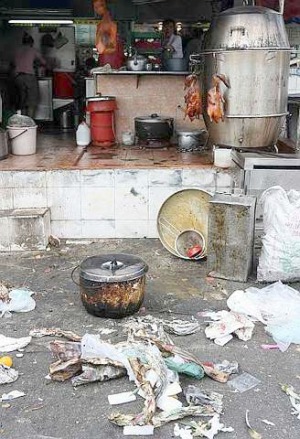 Stomach-churning sight: Another back lane in SS2 in Petaling Jaya filled with filth.

“However, programmes like this will only be successful in certain areas. We do want to work together with other residential association to help eradicate this problem,” he said.

According to Wangsa Maju resident V. Panchalai, 52, the rat elimination campaign was effective for her housing area.

“You see the rats moving around all the time and some are big like rabbits. The problem is because of the rubbish area, which everyone needs to be responsible for,” Panchalai said.

“Sometimes you get these people, who collect recycle items, tearing the rubbish bag and pouring out the contents,” she said.

Panchalai said that prior to the campaign, her husband used to eliminate the rats using poison.

According to a 65-year-old retiree from Wangsa Maju, who wants to be identified as Loke, the participation of the local community had helped to cut down the rat population.

“The rat population has definitely reduced tremendously but it was really bad previously,” Loke said.

“The only way we can solve the problem is by cutting their food supply. I have seen some rats tearing the plastic bags to get food from the rubbish area,” he said

Several measures can be taken to control rats like covering and disposing rubbish correctly, storing food properly, placing nets at places with holes, setting up traps and using rat poison.

For complaints on pesky rodents and other pests, email jk@dbkl.gov.my