Angry over parking meters in neighbourhood

They say it was unfair to install the machines in the housing estate as it is a residential area. We don’t want this here: Lim (right) pointing to one of the newlyinstalled parking meters in Taman Bukit Maluri, Kepong. Behind himare the traders and residents protesting against having to pay forparking in the neighbourhood starting July 1.

“There shouldn’t be parking meters even in the commercial centre of Taman Bukit Maluri because the shops there are patronised by us residents who go there to buy food and other daily needs,” said K. Karuna, a resident in the neighbourhood for the past 20 years.

“Why should we have to pay parking just to get our daily necessities in our own backyard,” he said, adding that the Kuala Lumpur City Hall should not impose parking charges on them.

Most of the residents in the neighbourhood were shocked when they found out that parking meters had been installed in the commercial area of Taman Bukit Maluri.

The meters were put up last week and parking fees would be implemented on July 1.

Motorists are charged 50 sen per hour for parking their vehicles in the area.

“The new parking system will definitely affect my business. I hope the meters will be removed so that my customers will not think twice about coming here to eat,” said a trader who only wanted to be known as Manogaran.

Yesterday (June 27), about 20 of residents and traders of the nearby morning market grouped together to stage a peaceful protest against the implementation of parking charges in their area.

Segambut MP Lim Lip Eng, who was also present, said the residents should all exercise their right and fight against the implementation of the parking charges.

He said DBKL should consider the current economic situation and should not add salt to the wound by asking the residents to pay for parking in their own neighbourhood.

“I will join forces with all the other MPs in Federal Territory to oppose the new parking charges.

“It is drastic, unfair and mean,” he said.

The residents also urged the DBKL to relocate the daily morning market currently held at the commercial area.

They said the morning market had become an eyesore and at the same time unhygienic. 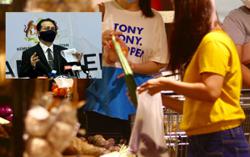