PJ pool may be reopened by year-end

THREE years ago, a filtration pump broke down at the Lorong Sultan swimming pool in Petaling Jaya and nothing was done to rectify the problem. Since then, residents have been deprived of the use of what was the first swimming pool to be built in PJ.

However, there is some hope that the pool may once again come alive by the end of the year.

The pool was initially operated by the then Petaling Jaya Town Council when it began operations more than 20 years ago but it was later privatised to Bina Syabas Development Sdn Bhd. 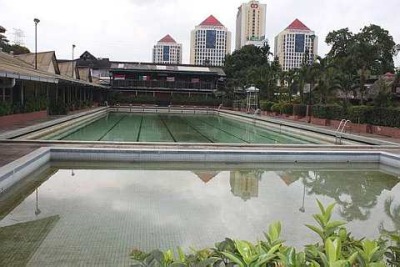 Forlorn sight: The pool has been lying empty for the last three years.

“The finance committee is expected to discuss the feasibility of reopening the pool but technical problems like the filtration pump would need to be resolved first.

“The finance committee will then make its recommendation to the council and, hopefully, by the end of this year, the pump will be replaced with a new one,” she said.

For Stanley Selvakumar, the pool was a special place for him and his friends who grew up in the city as it was their rendezvous.

“In our teenage years, we spent many long hours not just swimming but having a lot of fun learning to swim from the lifeguards.

“I feel sad my children cannot go to this pool which is near our house,” he said.

The swimming pool had also been the training ground for several swimmers and lifeguards.

Today, the swimming pool is surrounded by a food court, bar, restaurant and spacious car park.