All Puchong folks want is a proper hospital

THE clock ticked at 9am – an hour after the Puchong Community Clinic at the 14th Mile, Jalan Puchong, had opened its doors – and the single-storey structure was already bustling with activity.

People, including babies and ex-pectant mothers, filled the registration room and waiting areas, hoping that their turns to be attended to would come sooner.

Among them was Bawani Dulan Daran, who accompanied her sister to seek treatment. 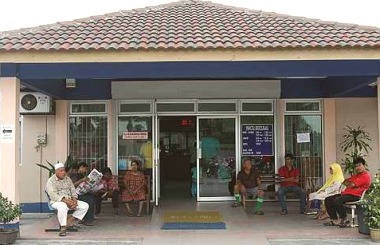 Come on in: Patients even have to wait outside the Puchong Community Clinic.

“We have been waiting for an hour but there are 30 more numbers before her turn,” she said, showing the four digits on the little paper in her hand and gesturing at the electronic number board.

The 22-year-old factory worker has been frequenting the government clinic for the past three years and she has a few grouses.

“We have to wait for a very long time before our numbers are called. And they don’t issue medical certificates - all I got were time slips to dock off some hours from work,” she said.

In cases where she felt she really needed to take a day off, she would take a bus to get to Universiti Hospital for treatment.

“The journey alone will take me an hour,” she said. 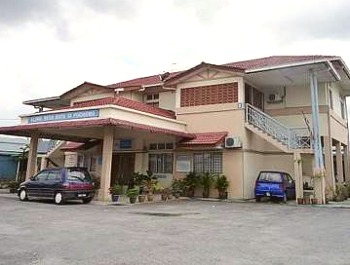 But there is a reason why she still comes back to this clinic despite the hiccups.

“I cannot afford to pay the bills for a private hospital or private clinics while I only have to pay RM1 here,” she said. Another patient, who did not want to be named, said it was not doctors who attended to the patients.

“Usually, we are checked by nurses or other medical attendants,” he said.

Despite an estimated population of 300,000 – most of whom are from the middle- or lower-income groups, there is no government hospital in the area to cater to the residents’ needs.

The nearest government hospitals are in Petaling Jaya, Serdang and Putrajaya.

Previously, the Kinrara Army Camp did provide medical services but it was closed in 2002 when the camp was relocated to Pahang.

The polyclinic at Batu 14, which also provides dental services, is closed on Saturday, Sunday and public holidays. The only option for residents is to ask for leave during the weekdays to seek treatment. 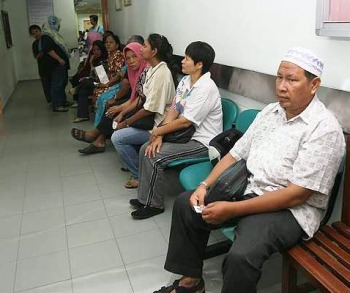 Long wait: Patients settling inas they wait for their numbersto be called.

This, naturally, explained the large turnout at the polyclinic and the people’s impatience.

When the polyclinic resumed operations after the lunch break, patients who were originally sitting or standing idly outside the locked clinic suddenly sprang into action.

They crowded around the main entrance and, as soon as the doors opened, they rushed in to get their numbers from the machine.

The elderly were not given any priority and an irritated woman was overheard complaining about another patient who cut her queue.

“There is no direct bus service to Serdang and Putrajaya and the facilities at this polyclinic are insufficient,” he said.

He suggested building a hospital where the polyclinic was located at the moment.

“This place is spacious and a multi-storey building can be built here,” he said, pointing at the land in the compound of the polyclinic, which was used by the public to park their vehicles.

Puchong MP Gobind Singh Deo said he had raised this issue in Parliament and the reply he received was that the polyclinic had most of the necessary facilities.

“While building a general hospital takes time, what we can now do is to get the federal government to upgrade the polyclinic,” he said.

He suggested having more nurses and permanent doctors at the polyclinic, for a start.

“I will invite Health Minister Datuk Liow Tiong Lai to visit this polyclinic and see how we can improve the system,” Gobind said.

Selangor Health, Estate Workers Affairs, Poverty Eradication and Caring Government committee chairman Dr Xavier Jayakumar felt that the need to have a government hospital in Puchong was a timely request.

“With the petrol price increase, there will be more people seeking treatment at government hospitals, and a big hospital is needed in Puchong,” he said.

The duty to provide healthcare falls under the responsibility of the federal government and Dr Xavier pointed out that besides the physical facilities, the government should also increase the expenditure on the administrative side.

“There shouldn’t be a wide disparity between the salary of doctors serving in public hospitals and those in private ones,” he said.

Dr Xavier added that the government hospital in Klang needed to be upgraded as well since it could not meet the needs of the large number of patients anymore.

“It is not the time yet to talk about privatising the healthcare system,” he said.

Related Stories:Puchong folks have other options